One of the biggest events of Comic-Con Experience Brazil was the global premiere of the “Wonder Woman 1984” trailer. In attendance for the event in Sao Paulo was the film’s director Patty Jenkins and star Gal Gadot, who were respectively excited about what’s to come in the anticipated sequel.

“The easiest way for me to sum it up without giving away too much is this movie is about colliding Wonder Woman with the evil of our times, which is the excess and opulence that we have found ourselves in a position of indulging,” Jenkins said.

“We’re running Wonder Woman right into mankind at their best and their worst and the villains that are born from that,” she continued. “And it’s talking about now as much as it is the ’80s and it’s using ’80s as a great metaphor to do it because the ’80s really wore us at our most extreme before we understood any cost. And so that’s what came to me, I was like, ‘What does Wonder Woman, if Wonder Woman is half God and is wise and kind and loving and generous in this way, what would she say about our morals right now? How would she encounter that?’ Except she has a very interesting different journey in this movie than you would expect as well.”

When Jenkins said that she learned a lot the first “Wonder Woman,” in particular how big of an operation it takes for a movie like that to succeed. That allowed her to understand what an undertaking it would for “Wonder Woman 1984” to launch the second time around and how much she appreciated all that went into it.

“I had a really good time doing it last time, but this time I went in understanding. No, I understand. Everyone’s telling me that I can do this, but I’m not, I’m doing it for real,” she said. “And so I understood a lot of those things, yet I understood how to get the best out of CG. I ran departments differently. I also just think the comfort of all of us having worked together.”

“So we had such a good time. Directing has always been something that I embraced how hard it is and I’m into it and I’m fine with it. And I know my crew, I’ve worked with them now for five years straight. And so sometimes I felt like we were getting away with something being on set and we’re laughing and Gal and Kris are like, let’s try this. And everybody who’s standing around on set, who’s new and visiting or something is like, ‘What’s happening?’ It felt like you’re messing around with your friends in high school and with all this, and that was pretty amazing,” she added 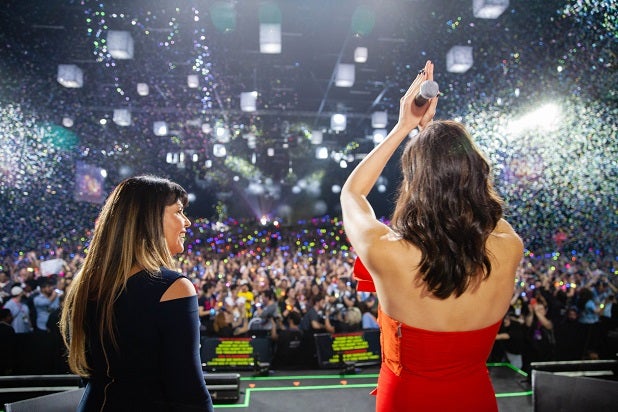 Based on the newly-released trailer, the sequel looks more action-packed than the first “Wonder Woman” film, and many of the stunts Gadot does onscreen, she does herself.

“I do have two stunt girls working with me because it is very extensive work and it’s extremely physical and it’s like a superhero. It’s like we’re doing it for real. If we have to choose, if it’s something that can be done or it can be CGI, we’ll go for the real version of it,” Gadot said. “Yeah, so I do a lot of it, but I do have support from my amazing stunt team.”