Wondery has dropped the podcast “Sword & Scale” and its host Mike Boudet one day after the host posted a comment about “dumb c—s” on International Women’s Day.

“We have decided to part ways with Mike Boudet and Sword and Scale,” the podcast company tweeted on Saturday, one day after a firestorm over Boudet’s latest online provocation.

We have decided to part ways with Mike Boudet and Sword and Scale.

On Friday, which was also International Women’s Day, Boudet wrote in a now-deleted post on Instagram: “I don’t understand dumb c—s. Maybe I should take one apart to see how it works.” 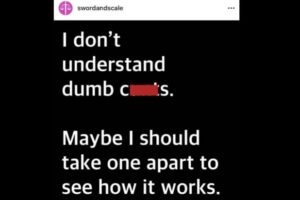 Wondery had declined to comment when TheWrap asked about the post on Friday, and did not immediately respond to a request for confirmation that Friday’s post was the reason for cutting ties with him and his podcast.

Boudet responded to Wondery’s decision in a Soundcloud file, and said that “Sword & Scale” will move to its own platform behind a paywall.

“Right now as it stands, this is the end. We’ll keep putting out Plus episodes on Patreon, until we move to our own platform and then continue putting out episodes, behind that paywall,” Boudet said. “Anything that was ad-supported is over now, because of Aaron Mahnke from ‘Lore’ and Rabia O’Chaudry from ‘Undisclosed,’ who let this boycott against me and my company, because they didn’t like certain things that I said.”

Even though Wondery cut ties with him, Boudet does not want people to start boycotting the company or anyone that advertises with them. “I don’t think anyone should ever take any sort of negative stance against Wondery,” he told TheWrap Saturday afternoon, adding that he’s against boycotts of any kind. “They should never be boycotted and should be allowed to conduct business as usual.”

You can listen to Boudet’s full earlier comments on Soundcloud below:

Mahnke responded to Boudet on his own Twitter account, writing: “First, a podcast as popular as his should never have to cease production. He has all the tools he needs to run it independently. Not my fault. Second, his behavior on social media did this, not the complaints from me, @reblavoie, @rabia, @glynnwashington and others.”

Boudet has a history of making sexist and derogatory comments, and his podcast that explores nonfiction stories of true crime has come under fire in the past. “Episode 126 is proof Mike is a s—bag,” one “Sword and Scale” listener posted after Boudet revealed the name of a previously anonymous kidnap victim who had been “brutally raped multiple times.”

He has also faced backlash because of a variety of his comments about the LBGTQ community, the elderly and mental illness. One of his podcast listeners wrote: “There’s a lot of podcasts that I love that have white cis males as hosts, but they’re kind and tolerant. They’re not disgusting anti-women, homophobic, transphobic a–holes.”

First, a podcast as popular as his should never have to cease production. He has all the tools he needs to run it independently. Not my fault.

Second, his behavior on social media did this, not the complaints from me, @reblavoie, @rabia, @glynnwashington and others. pic.twitter.com/rr5CatO9gJ

Omar Sanchez contributed to this story.