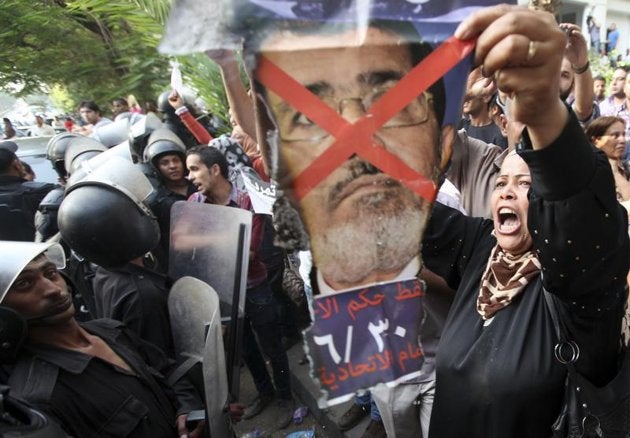 My friends in Egypt are jubilant at the ouster of Mohammed Morsi. But they are dismayed that the United States — the media and the Obama administration — are not more actively embracing what they consider a second revolution and not a military coup.

"We have unfinished business," said Mona al-Maghraby,  who with her husband actor Khaled Nabawy (at left) has been on Tahrir Square with the anti-Morsi protestors. "It is the continuation of the January 25 revolution.

"The theory we keep hearing from the American administration is that they believe this [Morsi] is the elected president and it's a problem concerning the democratic process. Allow me to tell you: I would accept it the first time. But when everybody tries to explain, with 30 million people in the street explaining and they keep saying the same sentence — it's a problem. It's as if you are deciding something for us."

Another friend echoed this view.  "Egypt is back to its people," said Amr Badr, one of my closest friends of two-plus decades. He is an executive in the tourism industry,  one of the many casualties of the post-revolution economy.  "The Egyptian people are one of a kind. We know now we need to keep our country together. This was the biggest people uprising in history."

It was, certainly in Egypt. The first revolution in January 2011 took place with tens of thousands in the streets, mainly the young, educated class, empowered by social media. Now, with the economy in ruin and governing structure in disarray, an estimated 30 million people — one third of the 85 million population of Egypt — were out in the streets on June 30 to demand that Morsi step down, a far broader display of disaffection.

How we in America should react is a valid question. I told Mona that it is difficult for the government, or the U.S. media for that matter, to validate what is technically a military coup, whatever the motivation. What happens the next time a military intervenes to abort a democratically elected leader anywhere in the world?

But she and and Khaled — who is making a YouTube video (we will post when it's up) — argue a different case:

"The people went down into the streets asking for him to leave and run an early presidential elections," Khaled, one of Egypt's most popular actors, wrote in a letter he is making public. "When they did their military supported their will… That's not a coup! That's a response to the people's will. A coup happens when there is no people demands, a coup happens when the military takes over which  is the not the case. A Supreme Court took over with a very clear announced Road Map."

Also read: How Egypt's Social Media Revolution Could Spread Across the Middle East

Whatever motivated the military's action, what follows will determine the future course of Egypt's nascent democracy.

On Saturday Mohamed elBaradei, the former nuclear inspector and political progressive, was named prime minister. This is a good sign, suggesting that the military is not interested in holding on to power. The liberal and progressive movement in Egypt has been trying to convince elBaradei to take a public role since Mubarak was ousted, but he had previously declined to step into politics.

President Obama has not said much in the aftermath of Morsi's ouster because there is much uncertainty, and not many good choices.

Here is what we do know: revolutions are messy, and they don't bring democratic change overnight. We must actively support the birth of a 21st century democracy in Egypt, with our words, our cash and our actions.

Mona, Amr and Khaled say that the Egyptian people are already changed as a result of the path they have taken.

"They are different people. That's what we're trying to say —  the people are not the same," said Mona. "They won't take what they used to take."