You see, I have just emerged from the nearly three-hour “2012,” the latest disaster spectacle from German director Roland Emmerich, in which we watch our own earthly demise in a dizzying, trashy entertainment package of bad acting, second-choice talent (John Cusack, pick up that ghetto-blaster and make another “Say Anything” … we miss you as a cute kid) and computer-generated spectacle. 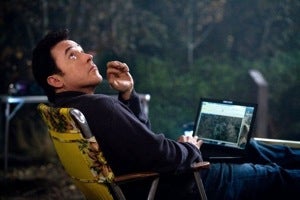 You can find perfectly good reviews of this movie elsewhere. (That was insincere, and you know it). But this was my take-home. Yep. I speak of the card-carrying B.S. that has become the Esperanto of our daily lives, and the cheesy, soapy genre known as melodrama. Both work so beautifully together, part and parcel of the American Experience.

At first blush, we think of both as bad things. But here’s the rub: We only think we think we do. It’s time to give both notions our fullest measure of love, respect and appreciation.

It’s time to admit they have long been — perhaps have always been — the way we process almost everything.

It’s time to realize how as a culture we can only process reality or entertainment (both of which have long become interchangeable notions) with at least one or both.

Basically, we need everything to be over the top — and we also want the truth to be rinsed off everything, like Alar off an apple.

We understand B.S. to be B.S. We know it’s our common parlance. 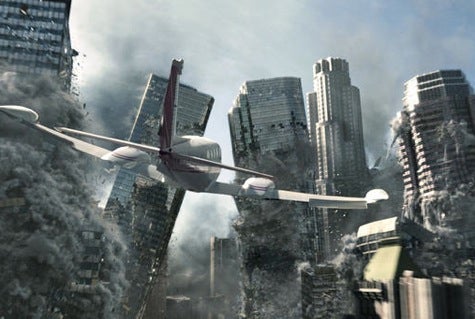 Thus, as I walked out after the preview screening of this movie, the usual cluster of very nice, underpaid publicity representatives waited eagerly outside — clipboards and pens at the ready — for critics’ comments.

They were eager to write down words like “fabulous,” “awesome” and “sick” for their corporate bosses. They wanted to tell the distributor that the crowd “loved” it. They were waiting for that hyperbole the way a crack addict waits for his daily rock.

And everyone emerging understood the kind of B.S. they were supposed to spout. After all, we are all literate in the discourse of quotidian insincerity (“Hey, what’s new with you?” “You have yourself a great day, okay?”) and movie hype. (“Best Disaster Movie Since ‘The Day After Tomorrow!!!’”). And so they did.

To me, this implied the insincerity and hype they wanted, plus I didn’t feel too dirty about the transaction.

Insincerity and melodrama have been interchangeable in the movies since D.W. Griffith used outright racism and melodramatic treacle in 1915’s “The Birth of a Nation.” Ditto for our “dialogue” and “conversation” in political life. (Town Hall Screamfests anyone? And then there’s the political ad that concludes with “This is Senator Marlon Q. Snakeoil and I approve this message.”)

Same for television, whether it’s “serious” "John Adams"-type drama, or a detergent commercial, or an infomercial, or even one of those CNN  banners heralding the latest Crisis/Flood/Earthquake/Shooting in the Heartland/Along the Border/In Afghanistan/Anyplace USA.

All B.S. all the time, no matter how “highbrow” someone or something pretends to be.

We wallow in a corn-sweetened cesspool of insincerity, hype and over-the-top drama. And for one fleeting moment during the movie, I forgot that. You see, I had a true emotional response. Just for a second.

But it was a breach of the moviegoing rules — almost as momentous as Lucifer entertaining the momentary notion he was as great as the Almighty and getting shuttled off to hell.

I should have remembered I was supposed to watch the wholesale destruction of the world as a popcorn spectacle. I was supposed to ignore the bad one liners, or the fact that Cusack and his family drive through an ongoing blitzkrieg of widening cracks in the earth, and molten lava projectiles without so much as a mark on their faces.

What happened is, I watched a tsunami rise above the White House and waste it. In one computer-generated maneuver, the Casa Blanca became instant mush. I found it very disconcerting. No fun to watch at all because — HELLO! — it is a national treasure.

And yes, even in a secular no-sacred-cows world, this felt wrong.

When someone appropriates a virginal image from you, you feel spiritually pawed or mauled or something. And for one sad moment, I mourned the loss of this American institution. And then I thought: “What are you thinking? You idiot!”

And you have yourself a great weekend.