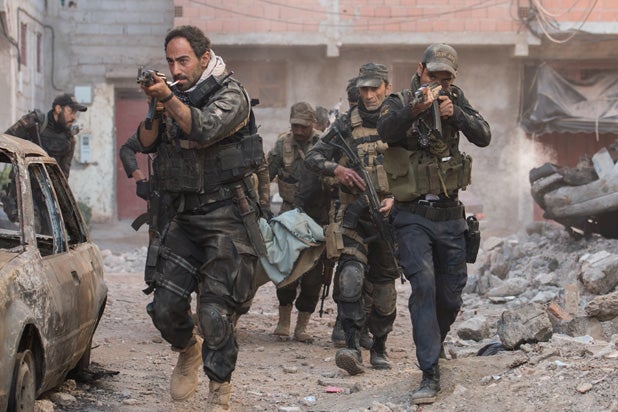 Screenwriter Matthew Michael Carnahan (“The Kingdom,” “World War Z”) is making his directorial debut with “Mosul,” a film about a SWAT team’s desperate fight to rid the Iraq city of ISIS militants that shot in secret in Morocco last spring with a local cast.

“Mosul,” for which Carnahan wrote the screenplay, explores the true story of an elite police unit made up almost entirely of native sons of Mosul who fought to liberate the city from 6,000 ISIS militants.

The film is based on a New Yorker story by Luke Mogelson, who embedded with the unit for two months and documented the team’s fight, block by block, to destroy ISIS.

Produced by AGBO and Condé Nast Entertainment, the film was shot on location in Marrakech, Morocco this past spring. The film, shot by Academy Award-winning “Avatar” cinematographer Mauro Fiore, is now in postproduction in Los Angeles.

“Our writer/director Matthew Michael Carnahan was the perfect artist to depict this uniquely regional story which champions a culture that has never really been championed on screen before,” producers Joe and Anthony Russo said in a statement. “The heart of the movie depicts the innate desire to fight for country and home.”

“Mosul” features a cast drawn from the Middle East, North Africa and the Iraqi diaspora. Producers described it as the flip side of “American Sniper”: these being the soldiers for whom the only way home was by fighting to re-claim it.

Worldwide sales will be represented by Endeavor Content at AFM.

'Saving Private Ryan' 20th Anniversary: 20 of the Most Brutal War Films Ever Made (Videos)

The sight of a soldier carrying his own severed arm is one of the many horrific images of "Saving Private Ryan," which 20 years ago earned instant acclaim for its unflinching depiction of the brutality of D-Day. But it's far from the only movie to show the horrors of war. Here are some of the most brutal war movies ever made (obviously, be prepared for violent imagery below).
View In Gallery