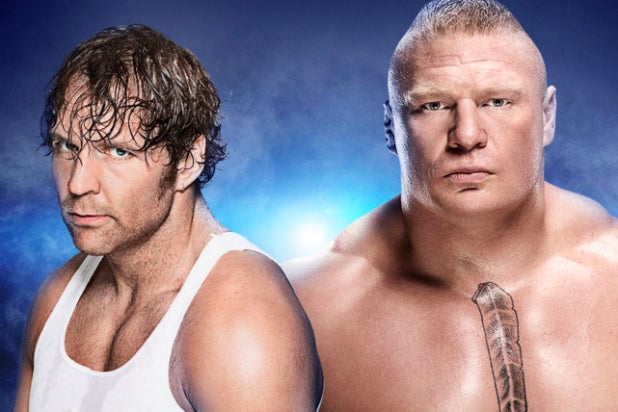 WWE fan favorite Dean Ambrose loaded up a wagon with weapons during Monday’s “Raw,” stacking up artillery for Sunday’s No Holds Barred Street Fight against Brock Lesnar at “Wrestlemania 32.” And despite his undeniable talent and lunatic ways, Ambrose will need all the baseball bats-wrapped-in-barbed-wire he can get against The Beast.

Paul Heyman is officially Brock Lesnar’s advocate, but he’s also the WWE Superstar’s best friend, social media connection and book co-author. It isn’t tricky for the pro wrestling promoter to puff up his boy Brock on TV — Heyman believes everything he says on the mic.

“I have the easiest gig in the world with Brock Lesnar,” Heyman told TheWrap. “I get to speak about a person who I genuinely, legitimately believe in — both on-camera and off-camera.”

“I am in awe of what he is capable of doing, and his performance level is higher and greater than anybody else I’ve ever seen in this industry,” he continued. “He is a once-ever athlete that has transitioned into the entertainment world and brings a legitimacy to it — and an authenticity to it — that no one has ever done.”

The talented wordsmith Heyman is actually the only person in all of WWE not named John Cena or Vince McMahon with the greenlight to go off-script on live television. And Lesnar never knows what his manager will say on TV, which is why the quiet killer’s reactions appear so genuine in the moment.

Heyman, never short on an anecdote, has earned such an honor. He’s also gave TheWrap a sharp-tongued prediction for Sunday’s “Wrestlemania,” the Super Bowl of sports entertainment.

“I think Dean Ambrose will emerge as one of the greatest heroes of modern-day WWE, simply based on the severity of the beating he will absorb at the hands of Brock Lesnar,” Heyman said.

Heyman added that he believes the entire card is “quite interesting,” and you can check out the full lineup posted at the bottom of this story.

Currently, Heyman only reps the former NCAA champion wrestler and Minnesota Vikings practice squad player. But the guy who used to own ECW (Extreme Championship Wrestling) has got a list of ex-clients that have been WWE champs, including The Big Show, Kurt Angle, Rob Van Dam and CM Punk.

When asked if Punk, who had a terrible public split with the WWE and is now fighting in the UFC Octagon, Heyman replied: “I don’t think he’s asked to be welcomed back, and I don’t think WWE is of the opinion that Punk wants to come back. And I think Punk’s attitude at this moment is to validate their theory.

On Sunday, the Lesnar-Ambrose No Holds Barred Street Fight may end up being bloodier and more dangerous than Punk’s first “real” fight — and chances are it may steal the whole big show.

Here’s the rest of the current “Wrestlemania 32” card; it’s subject to change, of course:

“Wrestlemania 32” airs live Sunday at 7/6c on the WWE Network and Pay-Per-View.