Wrestlemania 32, the Super Bowl of WWE, took over Dallas on Sunday as the wrestling world’s biggest stars entered the ring inside the Dallas Cowboys’ AT&T Stadium in Arlington, Texas.

The packed card in front of a sold-out crowd of 100,000 people included a 20-man Battle Royal, a Ladder match for the WWE Intercontinental Championship, the Divas Championship, a title bout between Triple H and Roman Reigns, and the highly anticpated Hell in a Cell battle with Shane McMahon taking on The Undertaker, and TheWrap was there taking in all the action.

Of course, the main man of the night was Dwayne “The Rock” Johnson, who took a break from filming the upcoming “Baywatch” reboot and Season 2 of HBO’s “Ballers” to return to his wrestling roots.

An eight-time winner of the WWE Championship belt, Johnson has since found phenomenal  success as an action star in “Fast & Furious,” “G.I. Joe” and “San Andreas.”

Johnson came out guns — and by that we mean “a flamethrower” — blazing and drove the crowd wild as he set a sign of “The Rock” alight.

“The Rock is back in Dallas … the Rock is back on WrestleMania. I told you we were going to make history, something that has never been done before,” he promised. “Records are made to be broken,” he said, telling the crowd that they had broken the WWE WrestleMania attendance record with a grand total 101,763 in attendance.

The wrestler-turned-movie star proved he could take on Bray Wyatt both physically and verbally, as he first mocked his opponent for eating at Cracker Barrel, then accused his brothers of being inbred and members of “Duck Dynasty.” Luckily, Johnson had another smooth-talking icon to help him take on the bearded clan: John Cena.

The Wyatt family were quickly taken down, and Johnson asked the crowd: “Can you smell what the rock is cooking?” We can, and it’s very fresh.

History was made with Amy “Lita” Dumas’ announcement of the first ever WWE Women’s Championship, which ultimately saw Charlotte beating Sasha Banks and Becky Lynch.

As the Superstars took to the stage in “the house that Jerry Jones built,” which boasts the world’s fourth-largest high-definition video screen, Flo Rida’s “My House” blasted out through the speakers.

Kevin Owens has spent the past 15 years fighting his way up the ranks, and on Sunday he made his WrestleMania debut. “I bought tickets to four Wrestlemanias myself, then last year I was there as part of the company but wasn’t in it, so this is my sixth time and I am finally taking part,” he told TheWrap before the event.

In the first match of the big night, Owens took on The Miz, Dolph Ziggler, Sami Zayn, Stardust, Sin Cara, and Zack Ryder in a Ladder match, where the title belt is hung in the air and contestants literally have to battle on ladders to retrieve it.

“I am looking forward to the Ladder match, but the one contestant I am most worried about is The Miz, which might surprise a lot of people, not because I think he is particularly dangerous but he is pretty sneaky,” Owens admitted to TheWrap on Saturday. “I can totally see him trying to hide out until the time is right and basically steal the title, so I need to keep an eye on him.”

Ultimately, it came down to Sami and Owens punching each other in the head trying to grab the coveted belt. But just when you thought it was over, Ryder — who is most often seen in the Hype Bros. tag team with Mojo Rawley — beat out The Miz’s comeback attempt to make the first Cinderella story of the night.

“This is the greatest moment of my life,” Ryder later told wrestling fanatic Maria Menounos. 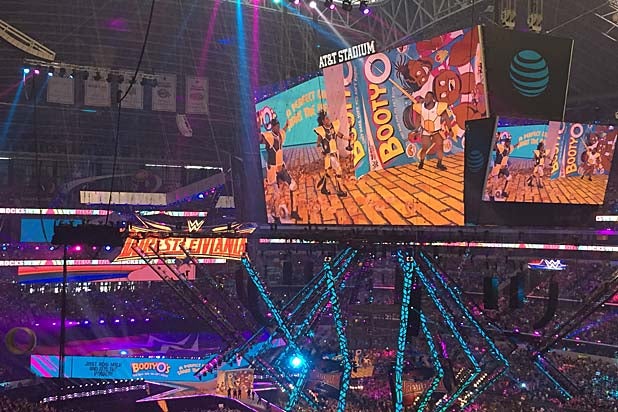 Entertaining tag team New Day then blasted out with their animated doppelgängers “promoting” their Booty-O cereal, before challenging the Irishman with the red mohawk, Sheamus, and his villainous League of Nations.

Then WWE legends “Stone Cold” Steve Austin, Mick Foley and Shawn Michaels appeared to add some serious star power to the match. They whipped the crowd up into a frenzy.

Be careful issuing challenges at @WrestleMania! You NEVER KNOW who will answer!! @RealMickFoley @SteveAustinBSR #HBK https://t.co/kkQsEtT4XZ

Next up, Dean Ambrose tried to take down Brock Lesnar in a “No Holds Barred Street Fight” that involved baseball bats wrapped with barb wire, multiple chairs, a fire extinguisher and even a chainsaw! But not even that arsenal of weapons could stop Lesnar from defeating The Beast.

The LOW BLOW by @TheDeanAmbrose leads to THIS… #WrestleMania #StreetFight pic.twitter.com/hkoMxEiTYF

Many hardcore WWE fans were waiting for the Hell in a Cell matchup between McMahon and The Undertaker and it did not disappoint, with McMahon doing a deadfall 20-foot drop from the top of the cell in a failed attempt to take out his creepy nemesis. Fortunately, he was OK, which even sparked applause from the media in the press room. Still, he ultimately succumbed to the crushing Tombstone move of The Undertaker.

On Saturday, the WWE honored new 11 inductees into the Hall of Fame Class of 2016. Menounos and WWE announcer Byron Saxton reported from the red carpet for WWE’s most stylish event of the year as Superstars, Divas and Legends showed off their glamorous sides. 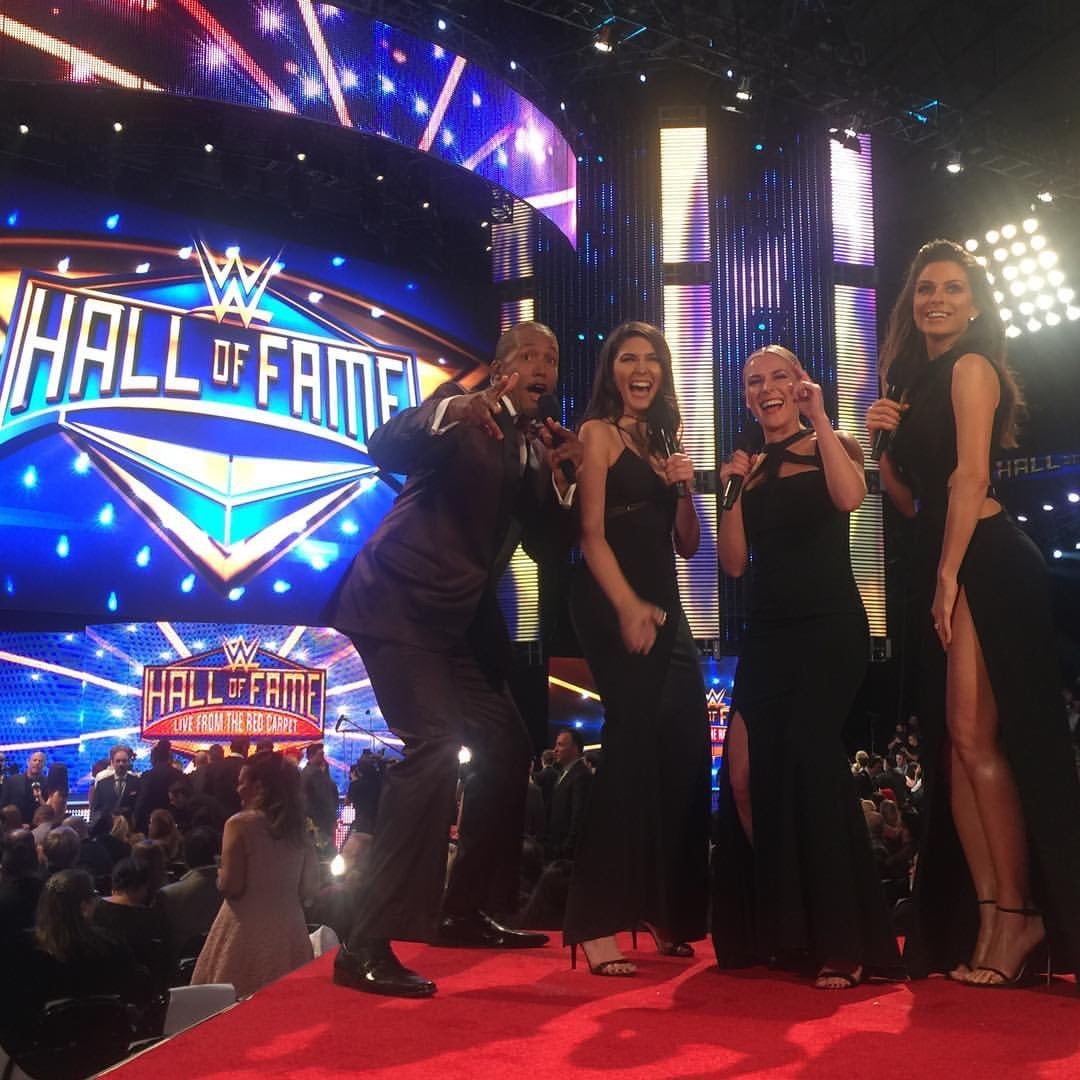 However the spotlight as the 57-year-old announced that he was retiring from the ring after a lifetime of wrestling.

Snoop Dogg was an apt choice for the celebrity inductee as his cousin Sasha Banks is one of the most lauded wrestlers in the world. (The talented relatives also took to the stage together the next night at WrestleMania for a special appearance.)

Over at Kay Bailey Hutchison Convention Center, the biggest names in NXT faced off Friday and Saturday in front of a sold-out crowd of passionate fans. Finn Bálor put his NXT Championship on the line against Samoa Joe, while Mojo Rawley dominated Logan “The Drifter” Shulo and amped up the hype level with his party-rocking speeches.

"I can feel it coming in the air tonight.." #Backstage #WrestleMania #HistoryWillBeMade #CalmBeforeTheElectricity