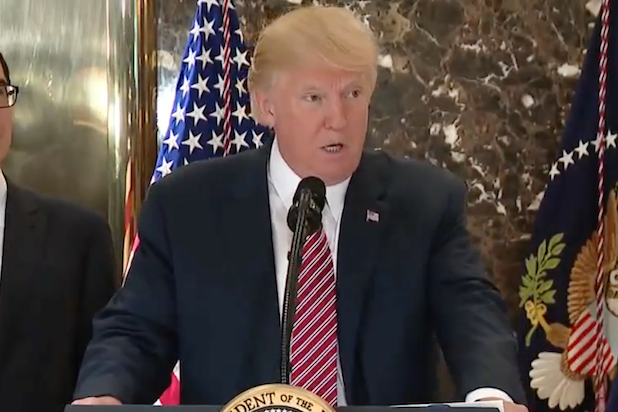 The Writers Guild of America West condemned President Trump’s latest comments on Saturday’s terrorist attack in Charlottesville, Virginia, calling his equivocation of white supremacists and anti-fascist protestors something that “legitimizes hate speech and violence, and disgraces our nation.”

“The Writers Guild of America West believes in free speech — even from Nazis and white supremacists,” the guild said in a Wednesday statement.

“But we completely disavow their views, which reflect the worst stains of American history, a history that still lives through racism, prejudice and systematic inequality of opportunity. We demand that violence in support of such views be properly punished. President Trump legitimizes hate speech and violence, and disgraces our nation.”

Tuesday afternoon, the president split the blame equally between white supremacists and anti-fascist protesters, saying there were “fine people on both sides.” This was after a group of torch-bearing white supremacists and neo-Nazis marched in the town Friday night and one ran over several protesters with his car the next day, killing 32-year-old Heather Heyer. A memorial service for Heyer was held Wednesday in Charlottesville.

While many Republican politicians — and even Trump’s chief of staff, Gen. John Kelly — winced at the remarks, former KKK leader David Duke tweeted his approval.