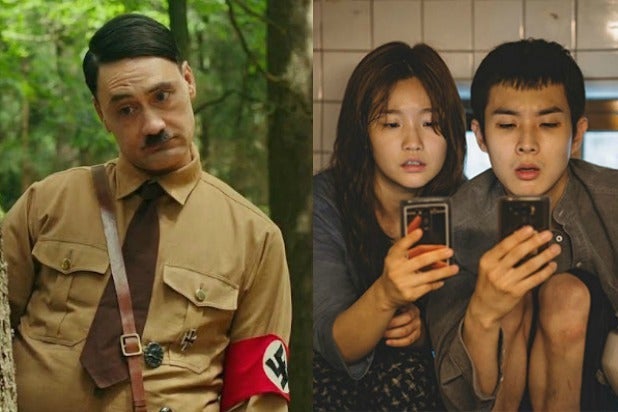 “Jojo Rabbit” has been named the best adapted screenplay of 2019 by the Writers Guild of America, which handed out its annual awards at simultaneous shows in Los Angeles and New York. “Parasite” has won the award as the best original screenplay, making it the first non-English-language feature to win a WGA award.

The film awards, which are traditionally held until the end of the show, were the first two categories of the night and were announced at the New York ceremony before the one in Los Angeles. Most of the nominees in those categories were heading to London for Sunday’s BAFTA Awards, so the unusual timing allowed them more time to get there from New York.

Because the Writers Guild limits eligibility to scripts written under the guild’s Minimum Basic Agreement or under the contracts of several allied international guilds, some significant Oscar contenders are always missing from the WGA nominees each year. This year, Quentin Tarantino’s screenplay for “Once Upon a Time… in Hollywood,” considered one of the frontrunners in the Oscar race for Best Original Screenplay, was not eligible for a Writers Guild nomination.

Last year, neither film category matched the Academy’s choice, with “Can You Ever Forgive Me?” winning the WGA’s adapted-screenplay prize over Oscar winner “BlacKkKlansman” and “Eighth Grade” winning in original screenplay over “Green Book.”

“Jojo Rabbit” and “Parasite” are both Oscar nominees, but the former is facing tough competition from “Little Women” and “The Irishman,” and the latter from “Once Upon a Time… in Hollywood” and “Marriage Story.”

Alex Gibney’s “The Inventor: Out for Blood in Silicon Valley” won the award for documentary screenplay.

In the television categories, “Succession” won the award for drama series, “Barry” won for comedy series and “Watchmen” won for a new series. “Chernobyl” won the original long-form award, while “Fosse/Verdon” won for a long-form adaptation.

Other TV winners included “Last Week Tonight With John Oliver,” “Special,” “The Simpsons,” “I Think You Should Leave With Tim Robinson,” “Full Frontal With Samantha Bee Presents Not the White House Correspondents’ Dinner Part 2,” “The Young and the Restless” and “Are You Smarter Than a 5th Grader?”

The Writers Guild was the last of the four major Hollywood guilds to declare its winners, doing so only eight days before the Academy Awards. The Producers Guild and Directors Guild gave their top prizes to “1917,” while the Screen Actors Guild awarded its film-ensemble prize to “Parasite.”

The WGA, West gave out its awards at the Beverly Hilton Hotel in Beverly Hills, while the WGA, East held its ceremony at the Edison Ballroom in New York City.

Here is the complete list of nominees. Winners indicated by **WINNER.

Adapted Screenplay
“A Beautiful Day in the Neighborhood,” Written by Micah Fitzerman-Blue & Noah Harpster, Inspired by the Article “Can You Say … Hero?” by Tom Junod; TriStar Pictures
“The Irishman,” Screenplay by Steven Zaillian, Based upon the Book “I Heard You Paint Houses” by Charles Brandt; Netflix
“Jojo Rabbit,” Screenplay by Taika Waititi, Based on the book “Caging Skies” by Christine Leunens; Fox Searchlight **WINNER
“Joker,” Written by Todd Phillips & Scott Silver, Based on Characters from DC Comics; Warner Bros. Pictures
“Little Women,” Screenplay by Greta Gerwig, Based on the Novel by Louisa May Alcott; Sony Pictures

Also Read: 3 Reasons Why 'Parasite' Really Could Win Best Picture - And 1 Reason Why It Can't

Digital News
“A Gridiron of Their Own,” Written by Kelsey McKinney; Deadspin.com
“Stories About My Brother,” Written by Prachi Gupta, Jezebel.com **WINNER

Thom Geier contributed to this report.