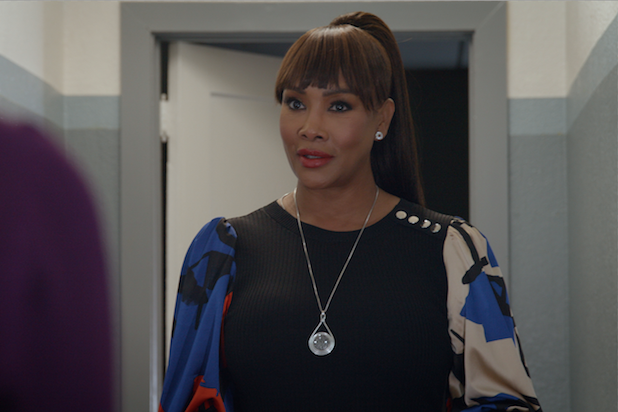 Vivica A. Fox’s “The Wrong Valentine” premieres Thursday, marking the star and producer’s 25th film in Lifetime’s “The Wrong” franchise. And 25 installments into her made-for-TV series, Fox says there is only one thing she could possibly do in a “Wrong” film that wouldn’t be right.

“I get to cast myself in characters that normally Hollywood wouldn’t even give me an opportunity to play,” Fox, who has produced all 25 “Wrong” films and has starred in 22 of them, told TheWrap. “I’ve played a detective, a principal, a mom. The only thing David DeCoteau, the director, won’t let me play is the villain, because I’ve always got to deliver that catchy phrase. ‘Well it looks like you’ve got the wrong cheerleader’ or ‘You’ve got the wrong Valentine’ or ‘You’ve got the wrong Mr. Right.’ And people are like, ‘I can’t wait for her to deliver the line.'”

But not playing the bad guy is OK by Fox, who is excited about the longevity of her Lifetime franchise.

“‘The Wrong’ franchise just keeps giving and giving. You can’t go wrong,” the “Empire” alum said. “I’ve done interviews and people are like, you can do ‘The Wrong Reporter,’ ‘The Wrong Driver.’ The list is, quite literally, limitless. ‘The Wrong Cruise,’ ‘The Wrong Valentine,’ which we’ve got coming up, ‘The Wrong Christmas,’ ‘The Wrong Boy Next Door.’ So it’s real fun and I’m just really grateful to David DeCoteau, and Hybrid Films, and Lifetime, that they have now turned me into a movie maker.”

The series began with 2016’s “The Wrong Roommate,” starring Fox as a police detective who investigates a messy domestic drama. Afterward, DeCoteau approached her about continuing the collaboration. “David said, ‘Gosh, I really love working with you. You want to do a couple more of these?’ And then it turned into a couple more,” she said. “So I’ve eventually just grown with the franchise.”

She continued: “And next thing everyone’s asking me to do is, ‘Well, do you think you’re going to direct some?’ And I’m like, ‘Don’t give me another job. I’m good with producing and starring.’ Trust me, my phone rings enough when we’re filming. Because we film them really fast. We film them in 10 days, so that’s why we’re able to do so many. We’ve got a wonderful team and a wonderful crew and a wonderful ensemble of actors that we use in different characters.”

“The Wrong Valentine” will reveal the series’ latest new characters when it premieres Thursday at 8/7c on LMN. The movie, which star Fox (of course), Mariah Robinson, Michael Bergin and Evan Adams, is pegged to the romantic holiday that’s just around the corner — but with a dark twist.

Also Read: Wendy Williams Comes in 'Like a Hurricane' in Trailer for Lifetime Biopic (Video)

Here’s the official description, per Lifetime: After her father’s passing, Emily (Robinson) tries to put herself out there. A bright student, Emily doesn’t have the easiest time making friends. With the help of Ms. Connelly (Fox) her senior year is in full swing, but she has yet to find a guy, let alone a Valentine of her very own. As luck would have it, the new boy at school has his eye on Emily and delivers her the annual school gift of a candy cupid. Could he be the one or does he have some ulterior motives as well?

“They’re like these sexy little thrillers with a little message,” Fox said of the movies. “Like ‘The Wrong Mr. Right,’ take your time making sure he’s right, because he could end up being so wrong. So there’s always a message, social media, not exposing yourself too much.”

She had a special word of caution for her female fans as they head into the weekend. “Girls have a tendency to put a whole lot on Valentine’s Day,” she said. “I think a little bit more than what guys do. So the message with this one is, don’t be putting so much on Valentine’s Day, he could turn out to be the wrong Valentine. Because it’s just a day, I’d rather someone be nice to me year round than just one day.”

Speaking of guys, Vivica is proud that her association with Lifetime has helped “bring in the guys.”

“With Lifetime, sometimes people just think that they are ‘chick movies.’ And I’m grateful to Lifetime that they now have Vivica Fox and that they’re trusting the brand of Vivica Fox because I’m bring in all of these fellas, OK?” she said, laughing. “‘Cause I get the fellas hitting me like, ‘Yo, I score points watching Lifetime. Telling my girl, let’s watch Vivica’s new Lifetime movie.’ My job was to bring in the guys. So, mission accomplished.”

“The Wrong Valentine” premieres Thursday at 8/7c on LMN.