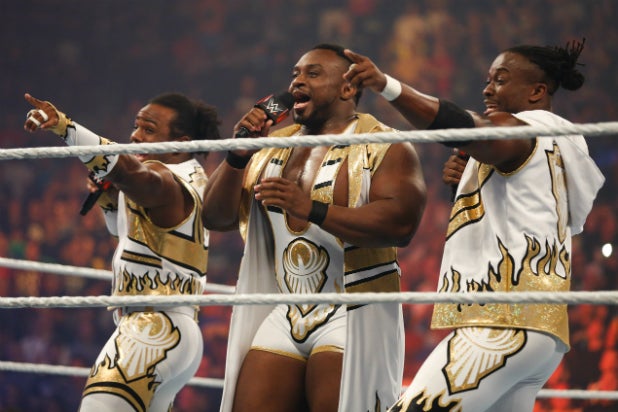 Kids love The New Day, and WWE loves their merchandise sales — it’s a (wrestling) match made in Booty-O’s Heaven.

Over their three-year history as a hugely successful three-man tag team, Big E, Kofi Kingston and Xavier Woods have sold unicorn horns, cereal and ice cream pops (among other goodies, which we’re told may soon include pancake mix) primarily to children, so presenting the trio as “the “good guys” is good for business. And to a publicly traded corporation in the midst of its “PG Era,” well, you do the math on how valuable all of that family friendly twerking and trombone-playing is.

But considering how “face turns” (a villain becoming a good guy) and “heel turns” (the opposite) are a common thing in WWE and a necessary storyline tool, can The New Day ever actually break bad? Big E — real name Ettore Ewen — isn’t sure, though he thought they’d be there by now.

“After we dropped the titles to Sheamus and Cesaro about a year ago, I really thought that’s where we were headed,” he told TheWrap during a recent interview. “I think there was a lot of feeling that we were stale, and we kind of felt that way as well.”

“We were getting a smattering of boos — sometimes more than a smattering,” Ewen (pictured above, middle) said.

Also Read: How WWE's TV Ratings Are Doing This Year

That’s often how such a shift from hero to hoodlum starts. But then The New Day had their popular (and pretty much still ongoing) program with current “SmackDown Live” Tag Team Champions The Usos — who themselves are on the “scoundrel” side — and all of that momentum ceased.

Ultimately, New Day (not to be confused with CNN’s morning series “New Day,” which President Trump would almost surely qualify as “the bad guys”) never went over to the dark side. After all, had they, WWE would need something to fill the void left behind by what E referred to as “the bright-colored, fun-loving trio.”

Tempting as it may be in the writers’ room, “I really don’t know if being heel is gonna be in the cards anytime soon,” Big E admitted.

He doesn’t personally sound opposed to trying on the black hat, however.

“I feel like we have a lot left to offer in terms of different varieties or different incarnations of The New Day,” E told us.

Plus, the man behind the Big Ending signature move is right-on about this: “You never know in 6 months how people are gonna feel,” he teased.

Readers can catch Big E and The New Day on WWE’s “SmackDown Live” every Tuesday at 8/7 on USA Network.