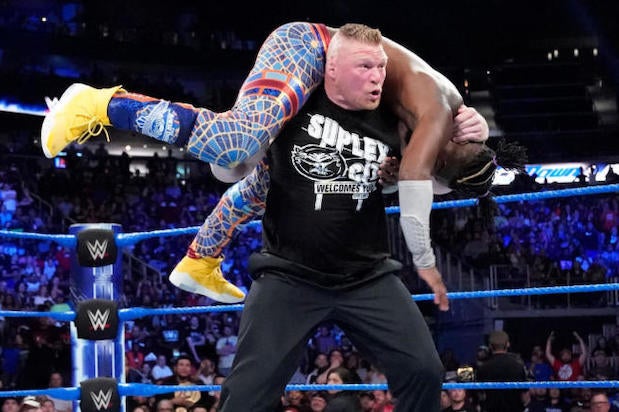 The Fox Sports era of weekly WWE wrestling series “Friday Night SmackDown” debuts just two weeks from tomorrow, but before fans across the country set their DVRs or send out viewing-party invites, they might want to hold off. There are some changes coming to how the show aired for years on USA Network — and no, we’re not talking about the Tuesday-to-Friday thing.

“Friday Night SmackDown” on Fox will still air live for the eastern and central time zones, beginning at 8 p.m. ET and 7 p.m. CT, respectively. It will continue to run tape-delayed for the west coast*, starting at 8 p.m. PT.

Fox believes this is a “cleaner” way to air the show, one insider told TheWrap.

(Most networks send programs out on two feeds: an east coast one and a west coast one. The central time zone simply picks up the east coast feed.)

Status quo so far, right? The mountain time zone is where things get interesting.

Fox’s “Friday Night SmackDown” will air at 7 p.m. MT, according to Fox Sports and WWE, which is 6 p.m. PT (and 8 p.m. central/9 p.m. eastern). In other words, the mountain time zone will soon get “SmackDown” two actual hours before the west coast does, and just one-hour tape-delayed overall.

Which feed mountain-time viewers actually received depended on their cable affiliate. So some fans there would see the show starting at 6 p.m. local time (MT), others at 9 p.m. local time (MT). That is, unless a viewer had DirecTV, which picked up USA’s east coast feed for the entire country. Any west-coast DirecTV subscriber* got USA’s “SmackDown Live” at 5 p.m. PT explaining our asterisk from above.

Not anymore. DirecTV customers can no longer watch “SmackDown Live”…live. “Friday Night SmackDown” on Fox will start at 8 p.m. PT on the west coast– even for satellite TV customers.

Now, for the cord-cutters. There’s a new and desirable option there too.

USA did not have “SmackDown” live-streaming rights, nor an app on which one could live-stream the cable network. They did, however, post episodes online at 6 a.m. ET on Wednesdays, or 10 hours after the live event actually started. Those episodes only stayed up for a few weeks, however, and then they migrated to SVOD service WWE Network ($9.99/month).

Fox will offer live-streaming via FoxSports.com and the Fox Sports App (with authentication), which will have “Friday Night SmackDown” live coast-to-coast — 8 p.m. ET/7 p.m. CT/6 p.m. MT/5 p.m. PT — according to Fox Sports and WWE. Episodes will be available on-demand on the Fox Sports app for 30 days.

“SmackDown Live” will air one more episode, this coming Tuesday, on USA Network. On Friday, Oct. 4, it shifts to Fox’s broadcast channel.

TheWrap first reported Fox’s acquisition of “SmackDown” and its intention to move the show from Tuesdays to Friday nights. We also first reported that the weekly pro-wrestling series would remain live.

WWE’s “NXT” debuted Wednesday on USA, airing its first hour on the cable channel and its second one on former home WWE Network. It will do the same next week before moving over Hour 2 on Oct. 2, just in time to compete head-to-head with TNT’s All Elite Wrestling (AEW) series debut.