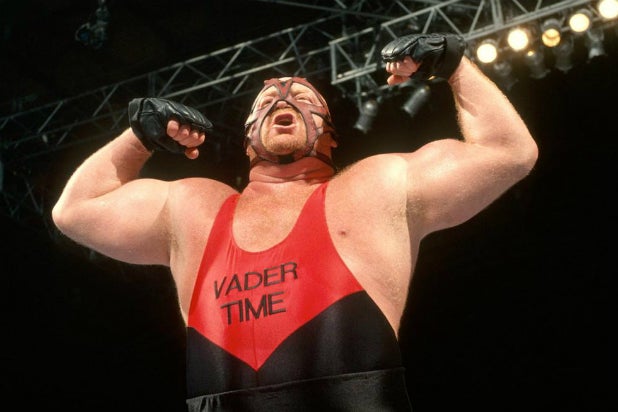 WWE and WCW legend Vader — also known to audiences as Big Van Vader — died Monday after a battle with pneumonia.

The professional wrestler, whose real name was Leon White, was 63.

It is with a heavy heart to inform everyone that my father, Leon White, passed away on Monday night (6/18/18) at approximately 7:25pm. pic.twitter.com/dP4CNaMuXa

Around a month ago my father was diagnosed with a severe case of Pneumonia. He fought extremely hard and clinically was making progress. Unfortunately, on Monday night his heart had enough and it was his time. pic.twitter.com/hJYjumvxjH

Vader also had a memorable three-episode arc on the ’90s sitcom “Boy Meets World,” when White played Frankie Stecchino Sr., the father of a school bully played by Ethan Suplee.

Tributes from current and past WWE Superstars have been rolling in since White’s son broke the news on Wednesday morning.

Maaaaan…Vader was my guy as a child and was a sweetheart when he came down to FCW to help train us. I’m forever grateful for the conversations I was able to share with him. Condolences to Leon’s son, Jesse, and the rest of his family.

My prayers and thoughts go out to the family Of truly one of the greatest big men to step foot in the ring. Vader my friend May you R.I.P

Rest in Power Big man. A shame we never got to mix it up more. #VaderTime pic.twitter.com/mFIEUfY1xE

My heart is heavy with the news of Leon White’s passing. He was an amazing performer who brought out the very best in so many. Best big man ever, the most effective monster heel of his generation. My heartfelt prayers to his loved ones, and my gratitude for having known him. pic.twitter.com/uy3yBfwZOs

“WWE extends its condolences to White’s family, friends and fans,” a spokesman for WWE wrote in a statement.

White began his sports entertainment career in the mid-1980s after retiring from the NFL due to injury, per WWE’s bio, which the company rep shared with TheWrap.

He rose to national prominence in Verne Gagne’s American Wrestling Association before joining New Japan Pro Wrestling as the masked Big Van Vader. He went on to become one of the promotion’s biggest stars and most feared competitors.

Vader then transitioned to World Championship Wrestling, where he would make the biggest mark of his career. He engaged in memorable rivalries with the likes of Sting and Ron Simmons, becoming a dominant, three-time WCW World Champion in the process. In 1996, Vader joined the WWE roster.