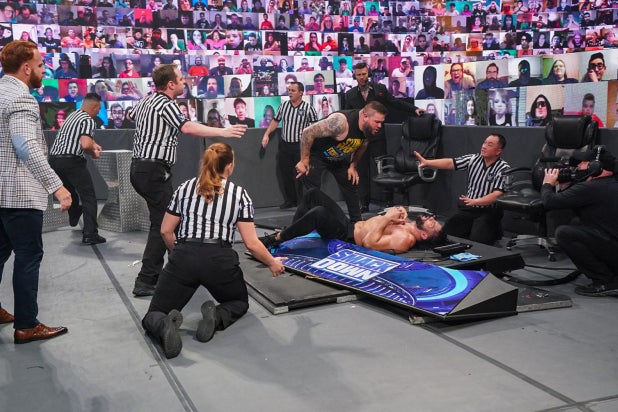 WWE Network is being folded into Peacock, a win for the NBCUniversal streaming service amid the content wars, and with a starting price of $4.99/month, one for cost-conscious wrestling fans. But how does the five-year deal benefit WWE? (You know, beyond its approximate $1 billion price tag, a reported figure that two individuals with knowledge of the deal confirmed to TheWrap to be accurate.)

We asked WWE President and Chief Revenue Officer Nick Khan that question and others, like: What does an even tighter relationship with NBCU (which already airs WWE’s flagship program “Monday Night Raw” and its NXT brand’s own show, as well as several crossover/spinoff reality series) mean for the future of “SmackDown” on Fox? And: How much of WWE making a deal like this is directly tied to a loss of live-event revenue due to the coronavirus pandemic?

Peacock’s got a chief revenue officer of its own, Rick Cordella, and we wanted a few answers from their money man as well. For example: What’s the latest on Peacock’s nonavailability on Amazon devices? As a standalone service, WWE Network has been available on Fire devices — but Amazon and Peacock have yet to come to carriage terms. With WWE Network on Peacock’s March 18 migration date mere weeks ahead of WrestleMania 37, it may be time to kick those negotiations into a higher gear.

Read our Q&A below.

TheWrap: The benefit to Peacock is obvious. Nick, in what ways does this deal specifically benefit WWE? Is it merely a cost-cutting move to not have to host/maintain your own service?
Nick Khan: No, so here’s what it is. Vince McMahon and the WWF, at the time, were the first movers from closed circuit to pay-per-view in the early ’80s, the first mover in the sports/entertainment space, outside of Netflix, to the SVOD model in 2014, and we believe the first mover, again, in this deal to partner with a massive conglomerate that has significant reach, in order to serve our fans and expand our audience.

So I’ll give you an example: Peacock is free in the [24 million] Comcast cable and Cox cable homes, as I’m sure you know, so…for the first time ever, WrestleMania, which is our Super Bowl, is going to be available for free to those homes. In addition to that, it cuts the cost for our consumers from $9.99 a month for WWE Network to $4.99 a month on the ad-supported tier of Peacock, where they’ll get not only WWE but EPL (English Premier League), “The Office,” Dick Wolf and so many other titles.

TW: For Nick, how much of WWE making a deal like this is directly tied to a loss of live-event revenue due to the pandemic?
Khan: It wasn’t a consideration. We expect that we’re going to have fans at WrestleMania in a couple of months and expect that, when it can safely come back — above and beyond partial capacity — we’ll be one of the first ones to go. Keep in mind also, our events are typically priced fan-friendly, so that loss was not a deciding factor in this deal.

TW: What does this, which makes for an even deeper alliance between NBCU and WWE, mean for the future of “SmackDown” on Fox
Khan: We’re confident and happy with our Fox/”SmackDown” relationship, which still has multiple years left on it. So nothing has changed in that arena.

TW: The price point to consumers ($4.99 with ads or $9.99 ad-free) is very attractive since they were paying $9.99/mo. for WWE Network anyway. We assume that will increase over time. Do you have a schedule in mind?
Cordella: So right now, we have no plans to increase the price of the $4.99 tier. Of course, I can’t predict the future, but that’s not something that’s in our immediate plans. The overarching reason that we’re doing this, and Nick sort of mentioned it, is that we believe there’s a larger WWE audience that exists. You see it on USA Network on “Raw,” you see it on “SmackDown” with Fox. And then you take the best content that WWE produces each year, these pay-per-views, and they tend — because it’s on the WWE Network and for a monthly fee at $9.99 — it tends to be a smaller audience.

So our overall goal, and why I think NBCU decided to move forward with this deal, is that we believe we can expand the accessibility of this content, right? That we can — through NBCU marketing, through the outlets that we have, all the various media outlets, through the price point reduction, through the addition of content — that we can grow this audience significantly that currently watched it. And that will have downstream impact to the rest of WWE and those TV ratings, hopefully, that you see on linear television, as well as to Peacock. There is a halo effect to those users coming in for WrestleMania, but then sticking around and watching “The Office,” watching “Yellowstone,” watching some of the great content we have in the 30,000 hours that are now bundled in with their subscription price.

TW: Rick, WWE Network fans who used Amazon Fire devices are surely going to want an update on Peacock’s availability now. Would/could this change anything with Peacock/Amazon?
Cordella: We’re in negotiations with Amazon right now, as we have been. Those are productive conversations and the hope is that we have a deal soon. But I don’t have anything to report today.