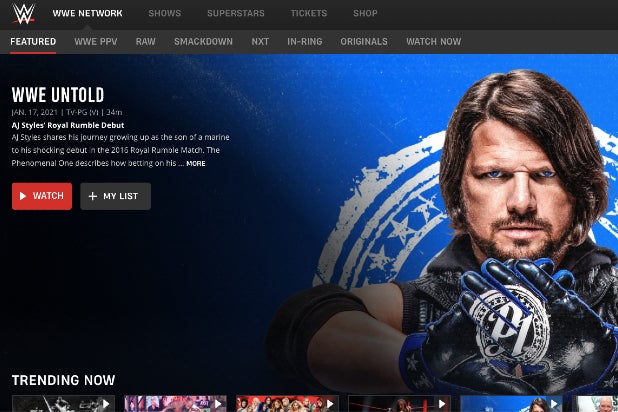 WWE Network is folding into NBCUniversal streaming service Peacock on March 18, when the professional-wrestling SVOD service will cease to exist as a standalone in the U.S.

While financial terms of the deal were not officially disclosed, two people with knowledge of the deal told TheWrap the span is five years and worth in the ballpark of $1 billion.

Membership will include all pay-per-view events (yes, including “WrestleMania”) beginning with March 21’s “Fastlane.” Either way is a good deal for wrestling fans: WWE Network alone had cost $9.99.

Last month, NBCU CEO Jeff Shell said Peacock had passed 26 million sign-ups. Those are not all paid, however. Comcast has projected Peacock will have up to 35 million subscribers by the end of 2024.

Also Read: 'Stone Cold' Steve Austin on How Much He Actually Imbibes During a Beer Smash

When WWE Network rolls into Peacock, it will bring more than 17,000 hours of new, original and library content in both an on-demand and 24/7-programmed channel. Peacock itself boasts more than 47,000 hours of programming.

“NBCUniversal has a long-standing relationship with WWE that began nearly 30 years ago with ‘Monday Night Raw’ on USA. WWE has always tapped into the cultural zeitgeist with spectacular live events and larger-than-life characters, and we are thrilled to be the exclusive home for WWE Network and its millions of fans across the country,” Rick Cordella, executive vice president and chief revenue officer of Peacock, said in a prepared statement. “WWE Network is a transformative addition to the platform and complements Peacock’s massive catalog of iconic movies and shows, as well as the best live news and sports, from NBCUniversal and beyond.”

“We are thrilled to further the long-standing and trusted partnership WWE has with NBCUniversal,” Nick Khan, WWE president and chief revenue officer, added as part of the announcement. “Peacock is an innovative platform that will enable us to showcase our most significant events, including WrestleMania, and provide the extraordinary entertainment our fans have come to expect with the combination of premium WWE content, live sports, news, films, and television programs.”

Peacock is available on Roku, Apple devices, Google (Android and Chromecast), Xbox and PlayStation, and Vizio and LG smart TVs.

Certain Comcast and Cox customers get Peacock Premium included for free. (Comcast is the parent company of NBCU.)