WWE is set to report its third-quarter 2019 financials on Thursday, the same day the professional wrestling league will holds its latest “Crown Jewel” pay-per-view event in Saudi Arabia.

Along with its revenue and earnings, Vince McMahon’s publicly traded corporation will also share the average paid subscribers for WWE Network in the third quarter, another important metric for evaluation with live-event attendance, merchandise sales and TV ratings. After steady growth to an all-time high of nearly 1.8 million in Q2 of last year, but that hasn’t held.

Will it be a happy Halloween for shareholders? Media analysts anticipate earnings of 2 cents per share on revenue of $191.43 million, according to a consensus compiled by Yahoo Finance. That revenue would be an improvement over the same quarter last year, but the earnings are likely to be down.

WWE management has said it anticipates average paid subscribers of approximately 1.53 million for the third quarter of 2019, which would be a decline of 8% from the year-ago period. Should that 1.53 million mark hit exactly, that would be a near-10% drop from last quarter, which housed WrestleMania 35 early on.

We can show you much more than those two benchmarks. See the average paid subscriber for each quarter of WWE Network’s existence plotted on a line graph below. 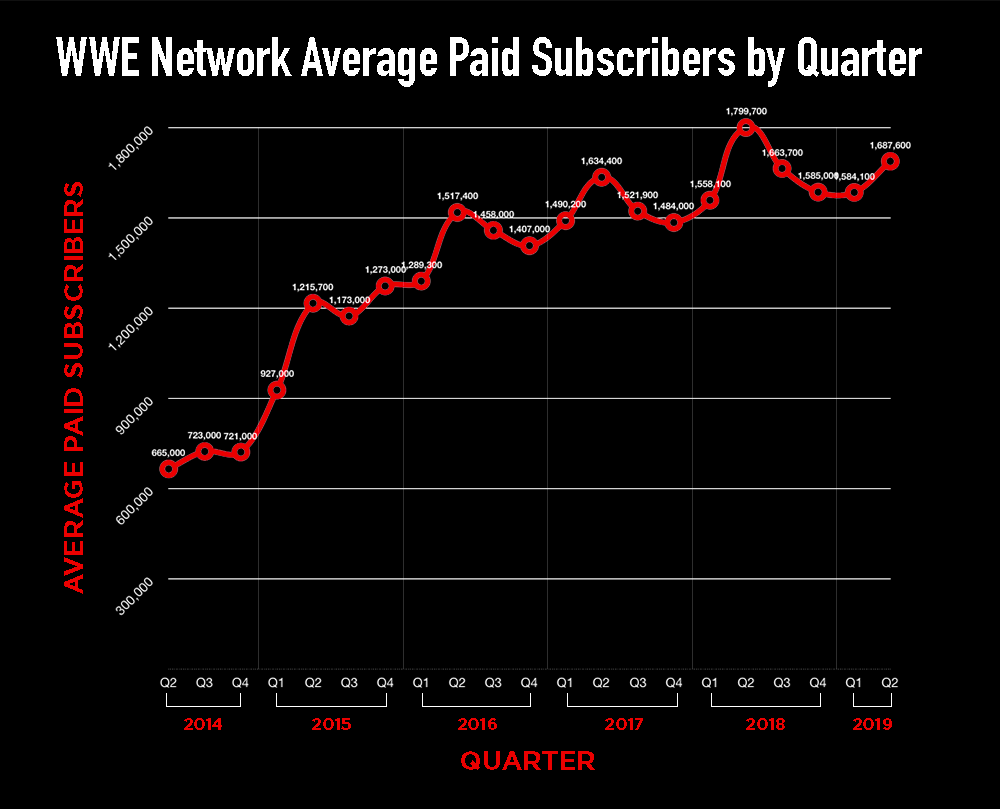 The company’s annual Super Bowl of pro wrestling, WrestleMania, has taken place in the second quarter of each year with the exception of 2015, when it was bumped up to Q1. That’s explains some of the cyclicality in the above graphic.

WWE will report its Q3 numbers before the opening bell on Thursday. McMahon and other top executives will host a conference call at 11 a.m. ET to discuss the quarter in greater detail.