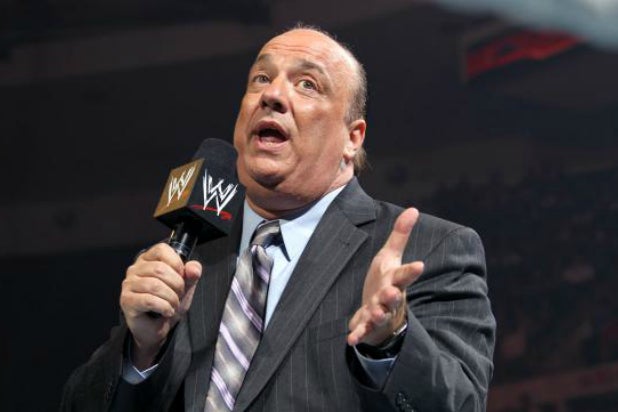 Ladies and gentleman, his name is Paul Heyman, and he’s set to take over your screen of choice — even without the monstrous presence of his “Beast” Brock Lesnar.

Heyman and Mitchell Stuart’s Looking 4 Larry (L4L), which has expanded from a marketing agency to now include a studio, have struck a long-term partnership with Roy Bank’s Banca Studio, TheWrap has learned exclusively. Together, they’ll produce unscripted content across multiple platforms.

The first project will star popular WWE personality Heyman, who will also executive produce the potential series. Good choice, even if Paul himself (kayfabe) doesn’t agree. (“Kayfabe” is a wrestling term that presents a staged performance as genuine or authentic — in other words, he’s just kidding around for entertainment, folks.)

“Against my strenuous objection, Roy Bank has decided our first collaborative project will be centered around me,” Heyman told us. “I have come to the educated conclusion Roy has made this decision based on a desire when pitching from the networks that we learn how to deal with rejection.”

And no, this initial venture will not have anything to do with the business of professional wrestling. Nor does it mean Heyman is walking away from WWE with Lesnar after WrestleMania 34, though that remains an unrelated possibility. It’s also mostly another story for another time, so check back with TheWrap soon about that.

While Heyman and Bank are not revealing many details about their upcoming production’s format, they say it “will straddle the line between talk, opinion, comedy and pop culture — all with the one-of-a-kind Paul Heyman brand and energy as the driving force.”

For more details, read between the following lines: “It’s a pretty radical concept,” Heyman, who recently moved L4L from Gramercy to Long Island City, told TheWrap. “Created by people with ADD for people with ADD, to be enjoyed by people who would subscribe to a theology of ADD.”

Bank (“The Apprentice,” “Flea Market Flip,” “Are You Smarter Than a Fifth Grader?”) says their mysterious TV series will be a “hybrid” of various genres, with “the energy of what [Heyman’s] been doing in wrestling” mixed with “the DNA of what is happening on late-night cable with the comedic-talk formats.”

“If you are a fan of Paul Heyman or you’re a fan of the energy that Paul Heyman exudes — even if you are not familiar with him directly — you’ll love this show,” Bank promised.

More concretely, Bank says there will definitely be a set on which Heyman interacts with other people. That’s a huge help Roy, thanks — you’ve practically written this story for us.

The talk show-esque project is going to hit the market immediately following WrestleMania, which takes place next month in New Orleans. Heyman, Stuart and Bank will pitch it to both digital and traditional networks, with the expectation that it will air later this year.

This is the perfect time for the busy Heyman to add another gig to his resume.

As we mentioned above, following ‘Mania, Lesnar is set to depart WWE again for the “realer” fighting of the UFC. Heyman’s contract is also up then, but the ECW founder and former play-by-play guy could still be teamed up with another Superstar, with MMA convert Ronda Rousey as the lead option. Roman Reigns, Lesnar’s opponent at the so-called “Super Bowl of Sports Entertainment,” is another candidate to be paired with Heyman’s gift of gab.

The show and the squared-circle circus act will not impact each other — this is why people like Paul Heyman have “carveouts” in their wrestling contracts.

Also Read: Hulk Hogan in Talks With WWE to 'Help Others Learn From His Mistakes'

Bank, the former president of Television at Merv Griffin Entertainment and head of Development for Mark Burnett, cannot believe that no one has tapped Heyman yet for TV work beyond the between-the-ropes stuff. After all, Heyman embodies the spirit of WWE more than most of the actual wrestlers do for many fans — including a casual one like Banks.

“He may not know how to do a flying leap off the top rope, but… nobody can entertain you and engage you and keep you glued to the screen like Paul can — and that includes everybody in that universe,” Bank, who compared Heyman’s crossover appeal to Dr. Phil, said during our interview. “The only one who probably can rival him is Vince [McMahon] himself. And when you think of it from that angle, how has television not taken advantage of expanding Paul’s scope of work outside of just being on the specific WWE things?”

Until this project reaches your local cabler or favorite streaming service, readers can catch Heyman over the next few Mondays on WWE’s “Raw” and April 8 at WrestleMania 34, when Lesnar will defend his Universal Championship title against Reigns.