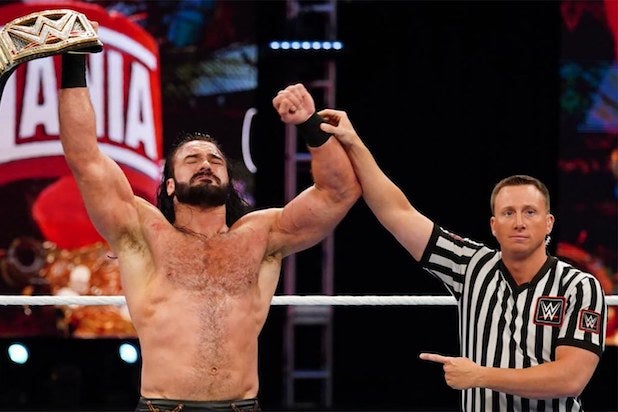 NBCUniversal CEO Jeff Sell says WWE programming is a “perfect property” for his company. It better be considering the Comcast-owned entertainment company is spending a few billion dollars on it.

Earlier this week, Shell’s NBCUniversal and Vince McMahon’s pro-wrestling company came to terms on a deal to fold WWE Network into NBCU’s Peacock streaming service. Those terms? Five years and in the ballpark of $1 billion, two people with knowledge of the agreement told TheWrap. And that’s on top of the billion bucks or so NBCUniversal’s main entertainment cable channel USA Network already pays for “Monday Night Raw” rights.

“WWE is a kind of a perfect property for us,” Shell said Thursday on a conference call tied to Comcast’s fourth-quarter and full-year 2020 earnings.

Why? Let him explain.

“(The streaming deal includes) thousands of hours of programming that were behind a paywall that we’ll now put up as a free service on Peacock, which will not only enhance the brand of WWE but we can monetize (through) advertising,” Shell continued. “We get the events that were behind the paywall that used to be pay-per-view to drive our $4.99 premium version of Peacock.”

Plus, they can now cross-promote WWE Network-on-Peacock with all of the WWE (and adjacent) programming on USA, Shell said, as well as sell ad-time across platforms to media buyers. That approach is the wave of the future to many in the evolving television landscape.

WWE Network programming heads to Peacock on March 18, when it will become part of Peacock’s “Premium” tier, which includes ads and costs $4.99 per month. It will also be available as part of Peacock’s Premium Plus tier, which costs $9.99 and is commercial-free. Both membership options will include all pay-per-view events (yes, including “WrestleMania”) beginning with March 21’s “Fastlane.” Either plan is a good deal for wrestling fans: WWE Network alone had cost $9.99.

When WWE Network rolls into Peacock, it will bring more than 17,000 hours of new, original and library content in both an on-demand and 24/7-programmed channel. Peacock itself boasts more than 47,000 hours of programming. The streaming-service-within-a-streaming-service will rollout one “signature” documentary annually beginning in 2022, the two parties said on Monday.