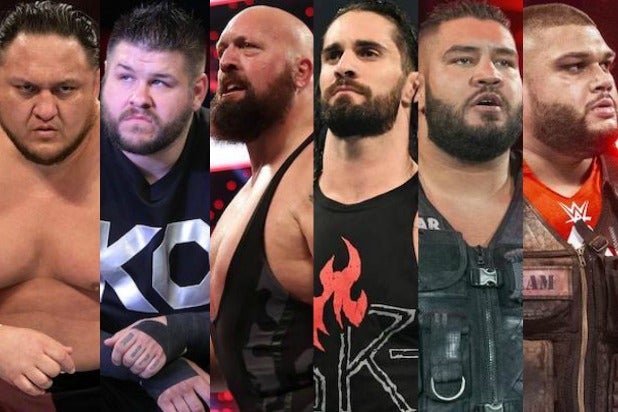 Monday’s “Raw” is going barehands: Tonight, the weekly wrestling series on USA Network will feature WWE’s first-ever “Fist Fight” match, and everyone from fans to the six participants themselves have been trying to figure out the actual rules for this event.

Well, TheWrap got the details first, so before Kevin Owens, Samoa Joe, Big Show, Seth Rollins and AOP go to the gauze, they’ll probably want to read this.

The “Fist Fight,” which will be Monday’s main event, is no-holds-barred, no disqualification, no count-outs, no pinfalls and no submissions — a first in the industry, a WWE spokesman told TheWrap.

“The match ends when the referee declares that one team is no longer able to continue,” the spokesman said.

Yes, an entire team of three has to be (storyline) “knocked out” for the match to come to a conclusion.

“This is a legit fistfight. You know how fistfights are? If we’re in high school and I say, ‘See you at 3 o’clock, meet you around back, we’re gonna have a fistfight.’ Fistfights happen until one guy drops, or two guys drop. This is a rumble, this is ‘West Side Story,'” the same person told us in the promo portion of our conversation. “This is where a score gets settled or a storyline gets dramatically ramped up.”

To be clear, it is not *actually* a legitimate fistfight like the boxing matches from 1998’s WWF “Brawl for All” were. This “Fist Fight” is still a scripted wrestling match — just one with unique stipulations and a cool name.

All clear now, K.O.? We could have saved Owens a lot of cell-phone minutes. See below.

Can someone tell me what the rules to a Fist Fight are? If I punch through Seth’s face, do we win?

Well Kevin, you’ll one-third win. Still gotta take out Akam and Rezar though — a tall order, but no one’s got the physically dominant fists for a fistfight quite like one of your partners, The Big Show.

“Raw” takes place in Lexington, Ky. tonight, when the teams will be Owens, Joe and Show vs. the “Monday Night Messiah” Rollins and the Authors of Pain tag team.

But, as a hacky (non-wrestling) promo might boast, that’s not all!

The final hour of “Raw” this evening will also feature a contract signing between Asuka and Raw’s Women’s Champion Becky Lynch. The two will throw down for the title this coming Sunday at the Royal Rumble.

Additionally, 10-11 p.m. ET will also feature another rematch between Buddy Murphy and Aleister Black, two wrestlers who have had an amazing rivalry as of late.

Also Read: Tito Ortiz and Alberto Del Rio on Going From Real Punches to Pro-Wrestling Punches - and Back

Also as of late, USA’s “Monday Night Raw,” which is led by executive director Paul Heyman, has experienced a ratings resurgence.

The Dec. 30, 2019 episode of “Raw,” which featured the wedding of Lana and Bobby Lashley, soared +46% in the key adults 18-49 demographic from the prior episode, according to Nielsen’s Live + Same Day ratings. It jumped +33% in total viewers. Those improvements made the final “Raw” of 2019 the highest-rated and most-watched episode of WWE’s flagship series in three months.

Tonight’s “Raw” faces huge cable competition in the form of ESPN’s NCAA National Championship Game between Clemson and LSU. Both live sporting events start at 8 p.m. ET, and both will last about three hours.

“Raw” ratings will likely be down, but WWE is not going out without a (fist) fight.