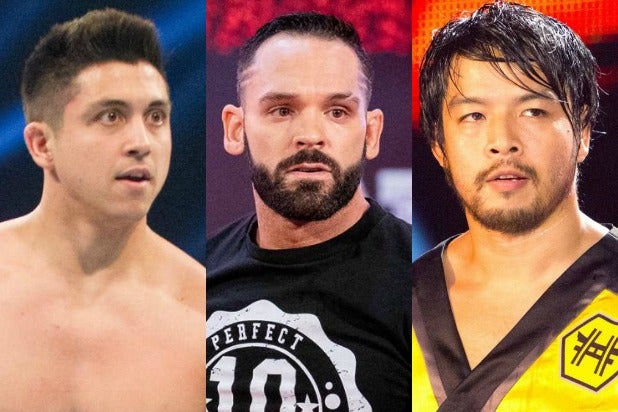 Here is all WWE had to say about the trio of roster moves:

“WWE has come to terms on the release of Theodore Perkins (TJP).”

“WWE has come to terms on the release of Kenta Kobayashi (Hideo Itami).”

“WWE has come to terms on the release of Ron Arneill (Tye Dillinger).”

TJP was WWE’s first-ever Cruiserweight Champion. In his TNA days, Perkins was a TNA X Division Champion. He expressed gratitude to WWE Friday in a tweet.

“Thanks for giving me a chance and letting me play for the team I grew up watching,” Perkins wrote.

Hitami also performed in WWE’s cruiserweight division. Those are the high-flyers who weigh less than 205 pounds and star on “205 Live.” (Not all WWE Superstars under 205 wrestle with the cruiserweights.)

“See you soon as KENTA,” Itami tweeted on Friday, referencing his ring name in Japan.

We knew that Dillinger had requested his release from WWE earlier this week. Dillinger had a previous stint with WWE in its then-minor league program OVW — he wrestled there under the ring name Gavin Spears between 2006 and 2008.

TheWrap reached out to WWE to ask if Perkins’ and Itami’s exits were also per their requests. We did not immediately hear back.