WWE’s chief branding officer Stephanie McMahon is taking a step back from her corporate duties.

On Thursday, she revealed that she’ll be taking a leave of absence to focus on her family, though she didn’t dive into specific details.

“As of tomorrow, I am taking a leave of absence from the majority of my responsibilities at WWE,” McMahon wrote on Twitter. “WWE is a lifelong legacy for me and I look forward to returning to the company that I love after taking this time to focus on my family.”

McMahon has been a part of WWE for over two decades. She was an in-ring performer for 18 years, beginning in 2000. In 2007, she took on a role as executive vice president of creative writing.

She was appointed to the role of chief brand officer in 2013. She’s also married to Triple H (whose real name is Paul Levesque), a 14-time world champion wrestler and the company’s executive vice president for global talent strategy & development. 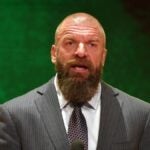 In March, Levesque announced that he would not be returning to the ring following a severe bout with viral pneumonia last September. While suffering from viral pneumonia, Levesque said that he was coughing up blood, and when he went to the hospital, they discovered fluid around his heart and in his lungs. This led to heart failure. He recovered, but he will stay out of the ring for good.

“I will never wrestle again,” he said. “First of all, I have a defibrillator in my chest, which, you know, probably not a good idea for me to get zapped on live TV.”