Shares of the New York Stock Exchange-traded WWE declined more than 10 percent this morning on weaker-than-expected first-quarter financials. For starters, the pro-wrestling company lost 11 cents per share, which was worse than the $0.02 loss that Wall Street had collectively forecast.

Below a snapshot of how WWE stock sunk from yesterday’s close to this morning’s open, when Q1 earnings were out. 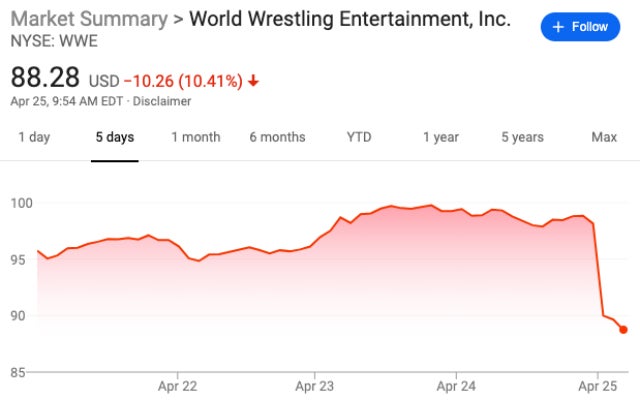 This writer already pointed out some of the highlights and lowlights (mostly low) from the quarter on Twitter. Since Monday was Earth Day, let’s recycle, shall we?

To specify, that 2 million is not paid subs. WWE reported 1.58 million paid in Q1 financials. https://t.co/4FJkTbezDd

WWE lost 11 cents per share. Wall Street predicted a loss of 2 pennies per. Revenue was a pretty big miss w/estimates coming in a hair under $199 million for Q1. $WWE

Vince McMahon believes the tough quarter was due in part to wrestler absences.

“During the quarter, we continued to execute our strategy and achieved targeted financial results,” the company chairman and CEO said in prepared remarks accompanying WWE’s Q1 financials. “While engagement metrics over the past two quarters were impacted by Superstar absences, we believe they will improve as our talent return and we launch our new season following a successful WrestleMania. We remain excited about the future, particularly with our debut on Fox in October.”

“In the quarter, we delivered Adjusted OIBDA within the range of our public guidance and continue to target full-year record revenue of approximately $1 billion and record Adjusted OIBDA of at least $200 million,” company Co-President George Barrios added. “Our primary focus is to deliver record results while investing in our key priorities: content creation, localization and digitization.”

McMahon, Barrios and other executives will host a conference call for media analysts and reporters at 11 a.m. ET Thursday.