The instantaneous upward mobility comes about as a result of a mega-deal with Fox Sports, first reported by TheWrap, for the TV rights to its weekly “SmackDown” show in what an individual close to the talks said would be a five-year deal worth as much as $1 billion.

The popular series, which currently airs on USA Network, will move to Fox’s broadcast channel in Fall 2019. The over-the-air network will shift the show from Tuesday to Friday.

Here’s a snapshot of Monday’s movement: 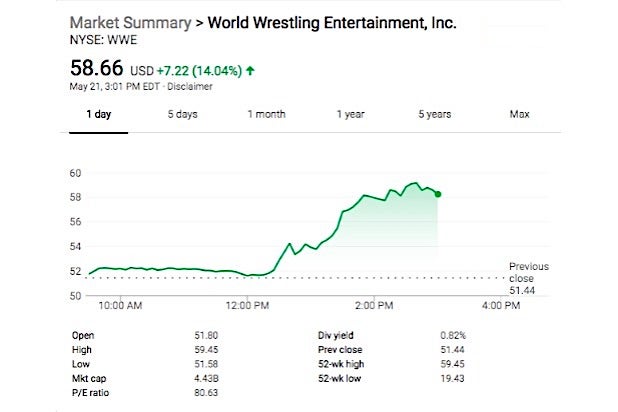 The pricey rights to the two most popular weekly professional wrestling shows have been on the auctioneer’s block for a few months now. Simultaneously, those platforms interested in live sporting events and a young male demo have also been bidding on UFC packages.

Next year won’t mark “SmackDown’s” first time on broadcast — the 19-year-old show used to air on UPN, then The CW, then MyNetworkTV, before heading to NBCUniversal’s Syfy and, ultimately, USA.