Below is a snapshot of the stock’s movement yesterday. Readers can see the giant jump in after-hours trading: 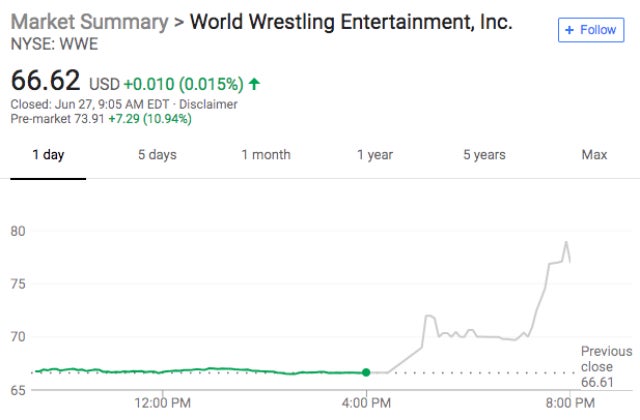 The former WWF made its deal with Fox Sports for “SmackDown” official on Tuesday, while renewing its longstanding partnership with USA Network for “Monday Night Raw.”

Both agreements are for five years. “Smackdown” will air Friday nights on Fox beginning Oct. 4, 2019, and will remain two hours in length.

“WWE and Fox are a perfect match,” said McMahon. “Moving ‘SmackDown Live’ to broadcast TV and having the ability to leverage Fox’s extensive portfolio of world-class sporting events will expand the reach of our flagship programming.”

This won’t be “SmackDown’s” first time on broadcast — the 19-year-old show used to air on UPN, then The CW, then MyNetworkTV, before heading to NBCUniversal’s Syfy and, ultimately, USA. Terms of the deal were not disclosed, though TheWrap previously reported that the five-year deal could be worth as much as $1 billion.

“At Fox we are thrilled to welcome WWE to the Fox Sports family and bring ‘SmackDown Live’ to broadcast television,” said Eric Shanks, president, COO and executive producer, Fox Sports. “We are huge fans and know that together Fox Sports will be the leader in live events for the foreseeable future.”