It is NOT a happy Halloween for WWE shareholders, as the professional wrestling company’s stock opened Thursday’s trading day down 14%.

That decline, which amounts to a drop of more than $9 per share, isn’t tied to today’s “Crown Jewel” pay-per-view — it is instead a result of some lackluster third-quarter financial results and a downgraded target for 2019’s operating income.

Below is a look at the stock’s performance at the time this story was published. We chose a five-day window to best illustrate the drop. 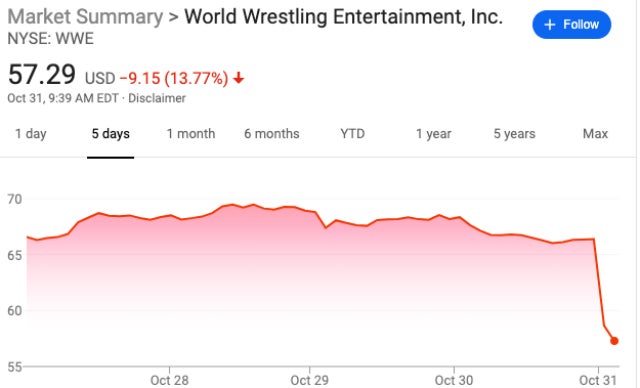 Overall, live-event and consumer products revenue were both down 13% in Q3 2019. WWE held fewer live events this year than last.

Below is the language used by WWE to explain its full-year 2019 OIBDA (Operating Income Before Depreciation and Amortization) downgrade:

The company’s previous full year guidance, which targeted Adjusted OIBDA of at least $200 million, assumed continued improvement in WWE’s engagement metrics, a second large scale event in the MENA region, and the completion of a media rights deal in the MENA region. Although the Company is holding a second large-scale event today in Riyadh, Saudi Arabia, its previously contemplated agreement for the region has not yet been completed. Additionally, the Company has accelerated strategic investments to support the creation of its content while reducing or delaying other expenses to lessen the impact of that investment. Given the delay in completing a MENA agreement and the impact of these strategic investments, the Company has modified its full year guidance to an Adjusted OIBDA range of $180 million to $190 million, which would be an all-time record.

The Company’s full year guidance includes estimated fourth quarter 2019 Adjusted OIBDA of approximately $108 to $118 million. The fourth quarter results reflect substantial revenue growth from the Company’s new content distribution agreements in the U.S., which become effective at the start of the quarter.

WWE is unable to provide a reconciliation of fourth quarter or full year guidance to GAAP measures as, at this time, WWE cannot accurately determine all of the adjustments that would be required.

The MENA region is Middle East and North Africa.

Vince McMahon and his company’s other senior executives will host a conference call at 11 a.m. ET to discuss the quarter in greater detail.