It’s been a challenging few months for WWE superstar Charlotte Flair after her father  — wrestling legend Ric Flair — was hospitalized in August with kidney failure and on the cusp of congestive heart failure.

Fortunately, the 68-year-old WWE icon escaped his near-death episode and now the father-daughter duo are celebrating the release of their new joint autobiography, “Second Nature: The Legacy of Ric Flair and the Rise of Charlotte,” chronicling their phenomenal careers and roller coaster personal lives.

As Ric Flair recuperates from his health crisis, Charlotte — born Ashley Fliehr — sat down with TheWrap to talk about his road to recovery, their relationship and the rocky path that took her to the squared circle.

“He is doing much better. Most importantly he just needs to rest and put on some more weight. I know he appreciates the thoughts and prayers from everyone,” the “SmackDown” star said.

Throughout the crisis when Ric was put into a medically-induced coma and given a 20 percent chance to live, Charlotte kept fans updated on his progress via Twitter. “I felt like I had to be on social media because I wanted to protect him and there were so many glorified stories going around,” she told TheWrap.

“Obviously in the book I opened up, but in general, I am very selective about what I say in terms of opening. I had so much support from my friends, family and the company so I had someone to lean on.”

Also Read: Ric Flair Details Near-Death Episode After Decades of Drinking: 'It Scared the Sh- Out of Me'

See the full interview with Charlotte below.

TheWrap: Where were you when you first found out your father was seriously ill?
Charlotte Flair: I was about to board a flight from Hong Kong to Boston, and the flight didn’t have WiFi. I didn’t know how sick my dad was but he was going to the hospital for a stomach ache and he never gets sick and would never go to a hospital. I took the next flight out to see him and they were only giving him a 20 percent chance. But he continued to get stronger, he got the pacemaker, he had intestinal surgery, and now he’s on the mend and is getting better. The prognosis is good.

What inspired you to join forces with your dad on his second autobiography?
So much happened in my dad’s personal and professional life since his first book [“To Be the Man,” published in 2004] that everyone said he needed to write another, and now that my dad is back as a part of WWE in a different role — as my manager — they were so adamant that I was a part of his legacy. So I made the executive decision that this would be my opportunity to open up and share my life experiences. I had been so ashamed by things and I wanted to send a message that your past doesn’t define you. I got into wrestling late in the game after going to college after getting married (twice) and getting divorced (twice) before I ended up here.

How does Charlotte Flair the WWE Superstar compare to Ashley the person?
I spent almost five years creating this character who is never vulnerable … the character that I needed to be. To open up in this book after showing only one side of me in the WWE Universe was very therapeutic. I have nothing to hide, I am not perfect and nobody is.

Also Read: Ric Flair Details Near-Death Episode After Decades of Drinking: 'It Scared the Sh- Out of Me'

What was the hardest thing about writing the book and ripping the emotional Band-Aids off?
I had blocked everything out and shut everything inside when I moved back to Tampa [in 2012 to sign with NXT].

Even when my brother died [Reid Flair had an accidental overdose of heroin in 2013], I went back to work a week later. The book really made me deal with some of those issues and why I am wired the way I am. For so long I’ve carried this weight … being married twice is embarrassing to me. It’s due to being compared to my dad, ‘Charlotte’s just like Ric,’ Charlotte is a character and Ashley is the real person, but this is about deciphering between the two. I wanted to open up and share my experiences with other people, and show that if I can change my life as much as I did — so can they. That’s why I decided to do it.

Was it like intense therapy looking back on it all?
It was ugly. I had to finally commit to “what happens in the darkness comes out in the light.” What I was most worried about was how it would impact my mom and dad. During their divorce … I was never really open with them about how I felt, such as when my dad left in ’05. I’ve never really voiced how hard that was on me. But I am 31 now, so obviously I don’t feel the same way I did at 19. I’ve dwelled for so long, it’s in the past and you can’t change it.

What was the hardest thing to write about?
Riki [ex-husband, Riki Johnson]. Because it’s such a taboo thing to talk about. What are my co-workers going to think of me? Now I am opening up about someone who I don’t talk to anymore, who really affected me in so many different ways. Having to talk about him was a whole other issue. He’s probably going to see this … that opens doors that I’d closed for so long, but if my story helps someone else then it’s worth it. No matter how mature I thought I was, I wasn’t emotionally able to cope with being in serious relationship.

What long-term impact has your dad’s health scare had on you?
Having those two weeks off work to spend time with my family, I realized I had to slow down a bit because I couldn’t just throw myself into work. It’s OK to take a second, making it in the WWE is not a sprint, it’s a marathon. I think I get nervous because I am older and see these younger girls come in, but I’m another example of “age doesn’t matter.” I want it so fast as I have so many future goals like a family, kids and to get my happy ending. But I know this is a process.

Did you always want to follow in your dad’s footsteps into the WWE?
My brothers wanted to be wrestlers, but I never saw myself in that light. When I was very little, I wanted to be a marine biologist. Then I got really into fitness and wanted to be a personal trainer, so that’s what I got into after college.

Is it an honor to now be part of WWE’s “Women’s Evolution”?
Yes! I know how passionate the women are and I know that whenever we’re given an opportunity, we crush it. It’s got to be exciting for the fans at home with little girls or little boys who are watching, too. The girls now have role models in the company to look up to who are Superstars. You see the women’s T-shirts in the crowd just as much as the men’s now. It feels good.

I’m proud to be part of a group of women who are shining a positive light on being who you are — strong, intelligent and empowering. It is something to smile about and I never want to take that for granted. You don’t want to get caught up in the wrong things and forget about the bigger picture. I’ve got to always remember that little girl on the front row, smiling.

You’ve got 1.03 million Twitter followers (and counting), how do you cope with the inevitable negative comments that all public figures get on social media?
I don’t give it life. The minute you respond to something negative, you give not only that person a voice, but you give the negative comment life. At first I wondered “why is this individual person so hateful?” then I realize they must hate their life more than what they are saying.

It is being mature enough to realize it is only for your attention, to get you to respond. So you have to turn the other cheek.

“Second Nature: The Legacy of Ric Flair and the Rise of Charlotte” is currently available on Amazon.com and other bookstores. 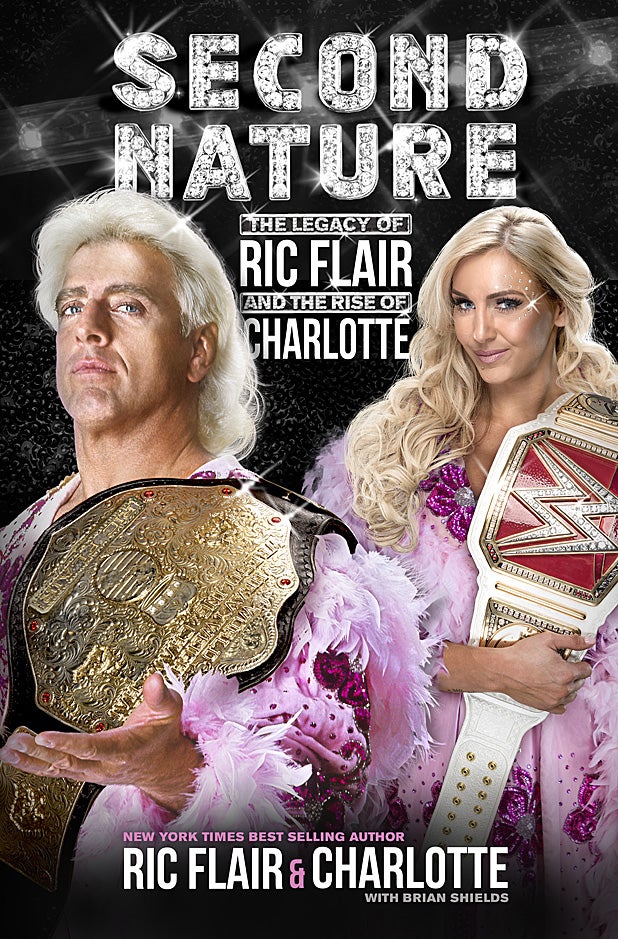