Wrestlemania 33 took over the WWE’s local stomping ground in Orlando, Florida, this weekend  — and, as expected, the result was epic.

With an A-list lineup of returning veteran stars such Goldberg, Brock Lesnar, The Undertaker, Triple H, Shane McMahon and Chris Jericho; Hollywood’s favorite Superstar John Cena; and new talent like Mojo Rawley flying across the ring with his best bud Rob Gronkowski, there was a lot to love.

The packed card in front of a sold-out crowd of 70,000 people provided endless entertainment including a Battle Royal, the Raw tag team championship ladder match, John Cena and Nikki Bella vs. The Miz and Maryse with their “Total Bellas” spoof, and the Smackdown women’s championship match.

While millions of viewers forked out for the pay-per-view, TheWrap had a seat inside of the Camping World Arena in Orlando. For those of you who didn’t buy the Super Bowl of the WWE, here’s what you didn’t see on TV.

The Battle Royal is a great way to pack the ring with current and future superstars, and this year did not disappoint. The squared-circle was overflowing with muscle, attitude and ego as the Hype Man Mojo Rawley, Apollo Crews, Curt Hawkins, Big Show and Dolph Ziggler to name but a very few, fought to take the crown from last year’s winner, Braun Strowman.

But one name who wasn’t on the roster — NFL star Rob Gronkowski — stole the show as he stepped up to help out best buddy, Mojo Rawley. The New England Patriots star was hanging onto the ropes with his brother and Hype Crew as Mojo threw contender after contender out of the ring. Before he jumped in there himself, the Super Bowl champion was cheering louder than anyone else in the audience.

And of course, he was there to take Mojo’s hand in celebration as he was crowned the winner. Bros will be bros.

Also Read: WWE's Chris Jericho on If It Was Weirder to Cut His Long Hair as Wrestler or Metal Singer

Theme park inside the stadium
Even mammoth wrestlers like Big Show were dwarfed by the size of the set and stage that was home to the “The Ultimate Thrill Ride” for the weekend. Usually hosting football games like the Citrus Bowl, every inch of the Camping World Arena was maximized on Sunday.Built in Orlando — home of Disney and Universal theme parks — WWE’s designers made the most of the construction talent around them to build a ring on top of a ring. Other aspects looked like terrifying roller coasters while they were in the midst of contraction, and an insanely long ramp that struck fear into speculators who got sneak peeks earlier in the weekend.

“Every year WWE gets bigger and better,” John Cena said at the WWE Make a Wish event the day before. “I saw the set last night, holy smokes — they built a theme park. We just want to give the fans the greatest experience ever.

Watch video of the set reveal below:

Pitbull and Flo Rida really get the party going
Grammy-winner Pitbull is in his element in south Florida, and he was joined by fellow party-rockers Flo Rida, Stephen Marley and LunchMoney Lewis to get the crowd on their feet. Pitbull performed his newest hit single “Options” with Stephen Marley, before being joined by Flo Rida and LunchMoney Lewis to finish the act with his popular single and WrestleMania 33’s theme song, “GreenLight.”

Having performed on the Gronk Party Cruise last year, Flo Rida had a least two huge fans in the audience in the shape of Rob Gronkowski and fellow-cruiser and Andre the Giant Battle Royal champion, Mojo Rawley.

Fans are as crazy as the wrestlers
If you think the WWE Superstars wear outlandish outfits, then check out the audience! The fans pulled out all the stops for what some of them, is the biggest night of their lives. From rainbow-colored wigs and zebra-striped Zubaz to head-to-toe spandex, nothing was too over the top. We’re pretty sure that pair of “cops” weren’t really with the Orlando Police Department … or that the hundreds of WWE belts were genuine hardware.

The night before, WWE fanatics took to the streets of Orlando breaking out into DIY wrestling matches as crowds gathered around cheering them on. You can’t make this stuff up … 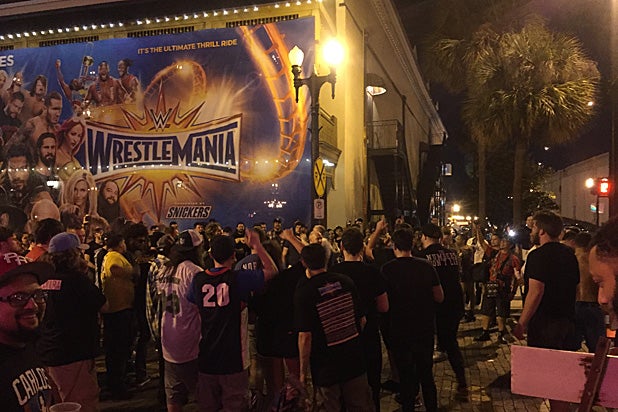 Kevin Owens uses his finger
You think that all WWE matches are won by guts and brawn? Sometimes all it takes is a finger. During the U.S. Championship showdown against Chris Jericho, Kevin Owens reached a pinky finger out to the rope to keep the refs at bay.

The sneaky move even got the whole of the press room cheering — they don’t teach that at the WWE Performance Center.

The sky explodes with happiness
Ahead of the Women’s Championship match once the sun had gone down, the sky above the stadium exploded with fireworks in the form of smiley faces and love hearts — which really did sum up the joy among the audience at the time.

Ladder Match brings back the Hardy Boyz
When hosts New Day came out and announced there would be a last-minute addition to the Ladder Match Tag Team competition, there was a ripple of excitement around the press room. Filled with reporters who are also WWE fans, they exploded into cheers when WWE legends the Hardy Boyz came strutting down the giant ramp.

“That’s got to be one of the most shocking WrestleMania moments ever!” the commentators gushed as the Hardy Boyz took the belt. Cue, more fireworks.

The next “Total Bellas” — The Miz and Maryse
You’ve got to give to The Miz and Maryse, they do a mean John Cena and Nikki Bella impersonation. And we’re using the word “mean” in every way possible. Luckily the “Trainwreck” actor and his “Total Divas” girlfriend take the harsh mocking in their athletic strides as they face-off against their lowlier opponents.

“I am used to it — everybody comes at me,” Cena told reporters of the ribbing. “It’s a first for Nicole, they say hell hath no fury like a woman scorned and I can attest to that. I’ve been on the receiving end of some upset nights,” he said.

The Miz and Maryse are merciful in their mimicking of WWE’s golden couple, check out their spoof a from a few days earlier in the video below.

“Today” anchor Al Roker gave a little dash of mainstream caliber as he hosted the face-off between the huge personalities as WWE’s most glamorous couple took on — and beat — their nemesis, proving once again that John Cena does NOT suck.

Of course, the match itself was actually overshadowed by Cena then pulling out the biggest rock ever to propose to Bella. Thank god she said yes!

Jimmy Fallon is a closet WWE fan
The “Tonight Show” host made the trip south from New York to sit ringside and enjoy the “Ultimate Thrill Ride.” He even revealed who his favorite WWE Superstar is by holding up his cellphone with The Undertaker as his screensaver.

Stephanie McMahon looks on in fear … before getting knocked out
Most WWE fans worried stressing about Seth Rollins’ knee during the epic match with Triple H, but Stephanie McMahon was about her husband. She paced ringside looking stressed … before Triple H was catapulted across the ring right into her forehead and sent her flying into a table.

See below for a full list of WrestleMania 33’s match card below.