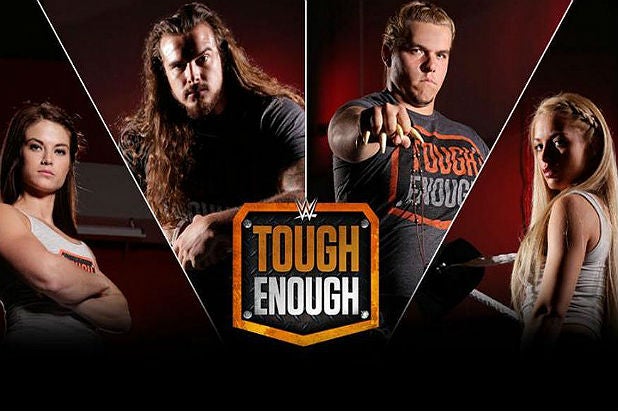 (Spoiler alert: Please do not read if you have not watched Tuesday’s finale of WWE’s “Tough Enough.”)

After WWE’s biggest Superstars dominated the ring Sunday at SummerSlam, the next generation of wrestling stars were named on Tuesday’s finale of “Tough Enough” airing on USA Network.

The reality TV competition came down to four finalists — Josh, ZZ, Sara and Amanda — with one male and one female contestant each winning a one-year, $250,000 WWE contract.

Josh Bredl of Thornton, Colorado, took the winner’s belt for the men, while Sara Lee of Hope, Michigan, was the victor among the women. TheWrap caught up with Josh this past weekend at SummerSlam at Barclays Center in Brooklyn, New York.

“You never do anything like this until you do this, so it’s make or break. You either figure it out or you don’t, there’s nothing comparable,” Josh told TheWrap.

The former Green Bay Packers defensive end switched his NFL dreams to the WWE earlier this year and said the toughest part of the transition was getting lean.

“I was 310 pounds and I knew I needed to lose weight,” he revealed. “I’ve been honing my diet. I’m now 271, so that was crucial to me,” he added, crediting the slim-down to the secret of his success.

“Some people said I might have been a sleeper [contestant], then I started losing the weight and I flourished. I got my flow again,” Josh told TheWrap.

“Having the locker room etiquette [of the NFL] is invaluable for learning the business side of things, but there you are part of the team so you lose a little bit of your character and you can’t stand out too much,” he explained, however in the WWE, “you have to break out of your shell otherwise you don’t shine.”

Fellow winner and dark horse Sara said she didn’t let naysayers get her down just moments after taking the top prize of Tuesday’s broadcast.”I didn’t let it get to me. You just have to put it aside and it refuels you more and more,” she

Finalist Amanda Saccomannom, who was defeated by Sara, believes she still has the “whole package” to make it as a WWE Diva.

“Coming into this most people looked at me like a Barbie doll and just a fitness model, but I’ve proved I have the athleticism,” she told TheWrap. “In the beginning I was just being myself, but then as the show went on I kind of developed this heel character without really trying.”

WWE NXT Superstar Mojo Rawley, who was also featured over SummerSlam weekend, had some sound advice for the winners.

“Don’t come in thinking you are special,” Mojo told TheWrap of the newly crowned Josh and Sara. “Come in hungry, come in humble, come in ready to work and like you didn’t even win the show. This is a foundation built on respect.

“Physically and mentally it will be different from anything Josh has seen in the NFL,” he said.

In Tuesday’s finale, the final four took on WWE Superstar Cesaro and WWE Diva Alicia Fox for the live reveal.

WWE Tough Enough is hosted by WWE Superstar Chris Jericho, who is joined by a panel of judges including WWE Superstar Daniel Bryan, WWE Superstar The Miz and WWE Diva Paige. Throughout the competition, the contestants were trained by WWE Legends Booker T, Billy Gunn and Lita.

See video of the winners below.