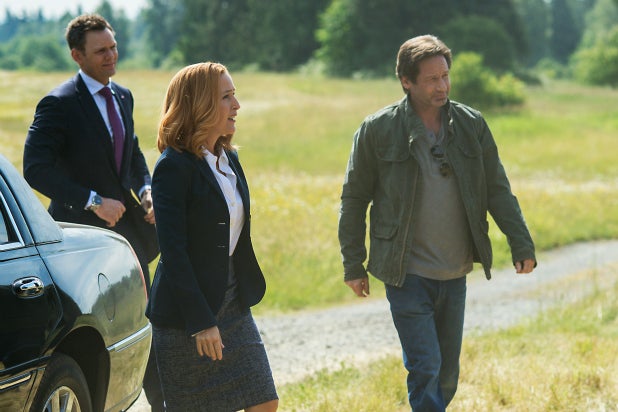 Fox co-CEOs Dana Walden and Gary Newman discussed the network’s fall and midseason schedules Monday morning during an upfronts conference call for press. They also spoke about shows that weren’t on their schedules, most notably more “X-Files.”

But that doesn’t mean Mulder and Scully won’t return — it just means that isn’t happening in time for this coming fall or spring.

Walden actually believes they’ll have “something exciting” to announce about the franchise this time next year, for the network’s 2017 upfront, which suggests the next run of episodes would come in the 2017-2018 season.

“I believe everyone is on board to do another installment of the show,” she said, citing conversations with David Duchovny, Gillian Anderson and creator Chris Carter.

Those discussions have actually gone far enough to include episodic order counts, Newman elaborated a little later during a follow-up question.

Of everyone’s willingness to revisit the franchise again, he added: “We feel encouraged by that.”

Readers can check out Fox’s actual upcoming slates and schedules here. Nearly 90 percent of the broadcaster’s upcoming 2016-2017 hours will be original episodes, Newman said on the call.