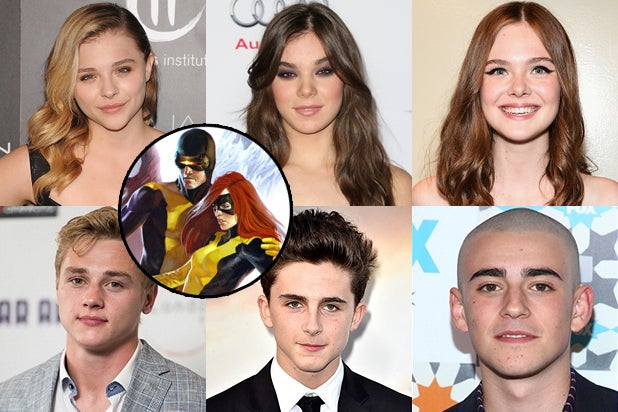 Chloe Moretz, Elle Fanning and Oscar-nominated actress Hailee Steinfeld are among the teenage leading ladies being eyed to play young Jean Grey in Bryan Singer‘s “X-Men: Apocalypse,” while Ben Hardy, Charlie Rowe and Timothee Chalamet are under consideration for the role of young Cyclops, multiple individuals familiar with the 20th Century Fox project have told TheWrap.

20th Century Fox had no comment on the respective shortlists.

While a representative for Moretz didn’t respond to multiple requests for comment, an insider confirms that she and Fanning were among the girls who met with Singer in recent weeks as he commenced his search for young Jean Grey, who is expected to recur in future “X-Men” movies.

Sources caution that official test offers for the role of Jean Grey have not been made yet and not only are other up-and-comers still in the mix, but it’s unclear whether Fanning is even pursuing the high-profile role at this time.

What’s clear at this point is that Singer is aiming high for the role of young Jean Grey, while the director seems more open to casting a fresh face as Cyclops. The on-and-off couple, often considered the emotional center of the “X-Men” universe, have existed in the comics since the team was launched in the 1960s, with those younger versions recently transported to present day for a major arc under writer Brian Michael Bendis.

Famke Janssen played Jean Grey in five “X-Men” movies, with Haley Ramm portraying the character in “X-Men: The Last Stand.” Cyclops, aka Scott Summers, has been portrayed by James Marsden in four films and by Tim Pocock in “X-Men: Origins: Wolverine.”

“X-Men: Apocalypse” takes the franchise in a new direction, and producer Simon Kinberg has already revealed that the film will bring in younger actors to play Cyclops, Storm and Jean Grey.

“X-Men Apocalypse” will highlight Magneto’s romance with Mystique, putting stars Michael Fassbender and Jennifer Lawrence front and center, which is right where Fox — and audiences — want them.

“Apocalypse” is scheduled to start production in the spring, as Fox will release the film on May 27, 2016. The most recent entry in the comic book franchise, “X-Men: Days of Future Past,” grossed nearly $750 million worldwide.

Moretz already has one comic book movie franchise under her belt, having played Hit Girl in the “Kick-Ass” films, though that franchise can’t compete with the size and scope of the “X-Men” universe. She’s currently filming her own franchise starter — Sony’s “The 5th Wave,” based on the bestselling YA series by Rick Yancey. The only other upcoming project to which she is attached to star is Sacha Gervasi’s “November Criminals.”

Steinfeld has been working non-stop since she earned an Oscar nomination for her supporting turn in “True Grit.” She currently co-stars in Tommy Lee Jones’ awards contender “The Homesman” and she has Universal’s “Term Life” and “Pitch Perfect 2” on the horizon along with this year’s Toronto selection “The Keeping Room.”

Fanning has vacillated between blockbusters like “Maleficent” and “Super 8” and indies like “Ginger & Rosa,” “Low Down” and “Young Ones.” She recently wrapped “Trumbo” with Bryan Cranston and Helen Mirren.

Hardy is best known for playing Peter Beale on “EastEnders,” while Rowe stars on “Red Band Society” and played a young Andrew Garfield in “Never Let Me Go.” He also appeared in “The Golden Compass.”

[Linda Ge contributed to this report.]