Howard and Brian Grazer will produce through their Imagine Entertainment banner, while author Brown will executive produce with Imagine’s Anna Culp, Bill Connor and David Householter. Michael De Luca and Andrea Giannetti will oversee the project for Columbia Pictures. Production starts at the end of April.

David Koepp wrote the script based on Brown’s book, which served as the follow-up to “The Lost Symbol.” Sony and Imagine opted to skip that entry in the Robert Langdon series, which has grossed more than $1.2 billion worldwide to date.

Hanks will return as the Harvard symbologist, while “The Theory of Everything” star Jones will play Dr. Sienna Brooks. When Langdon wakes up in an Italian hospital with amnesia, he teams up with Sienna to help him recover his memories and stop a madman from releasing a global plague connected to Dante’s “Inferno.”

Khan, who co-starred in both “Life of Pi” and “Slumdog Millionaire,” will play Harry Sims, aka The Provost.

Sy, who starred in the French box office sensation “The Intouchables” and will soon be seen in “Jurassic World,” will play Christoph Bruder.

Knudsen stars on the hit Danish TV series “Borgen” and can currently be seen in “The Duke of Burgundy.” She’ll play Dr. Elizabeth Sinskey, the head of the World Health Organization in “Inferno.”

The filmmakers are also in talks with several other internationally recognized actors for major roles.

Once slated to go head-to-head with “Star Wars: Episode VII,” Sony wisely pushed “Inferno” back to Oct. 14, 2016, where it will battle J.A. Bayona’s “A Monster Calls,” which features Liam Neeson as the titular creature.

“For this film, I wanted Tom Hanks to be surrounded by an international cast of actors whose energy will underscore Robert Langdon’s life-or-death peril, the high-stakes action he takes, and the global threat that he’s trying to prevent. Felicity, Irrfan, Omar, and Sidse have all broken through with recognition here in America as well as their home countries  — they are phenomenal talents and we can’t wait to get started,” said Howard.

“We’re thrilled to be making a third Robert Langdon film with Ron, Tom and Brian,” said Doug Belgrad, president of Sony Pictures Entertainment Motion Picture Group.  “’Inferno’ will deliver all of the excitement, intrigue and international adventure that audiences expect from a film based on Dan Brown’s huge selling Langdon book series. We can’t wait to see this character back on the big screen.”

Sy is represented by CAA, Agence Adequat and Ziffren Brittenham. Khan is repped by the Gersh Agency and Brillstein Entertainment Partners, while Knudsen is repped by Troika and All That Management. 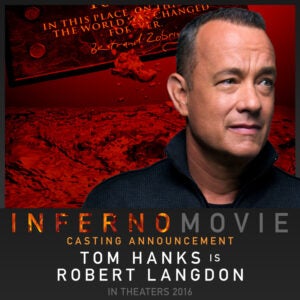