So you think Sony is planning to make a little money on the Michael Jackson concert movie?

Check out the invitation to the premiere, which came in a heavy black envelope that isn’t quite vellum, no it’s more like actual suede, jet black and heavy and important. Postage alone cost $2.24. Inside is a black trifold, sealed with the iconic image of Michael, hands in the air, lit from within with a collage of images.

You break the seal – gently – and inside is a shiny metal plate, reverse-embossed with the words: Michael Jackson’s This Is It. And on the other side, a cherry red square, set off by the shiny silver background, inviting you and a guest to the World Premiere on Tuesday, October 27. "Worldwide satellite event," the invitation intones. "No admittance after 6 pm."

For this much fuss, I might expect Michael himself to rise from the dead and attend.

I haven’t seen a ticket like this since Vanity Fair sent hand-addressed invites to its Oscar party that looked like they’d been penned by Modigliani. 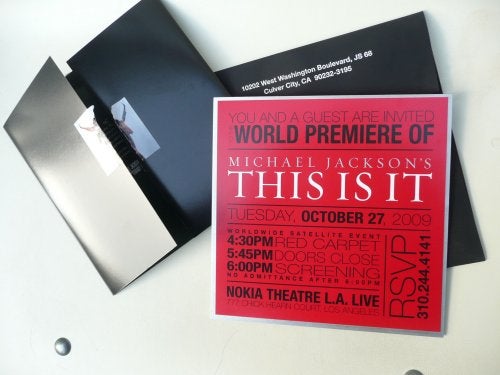