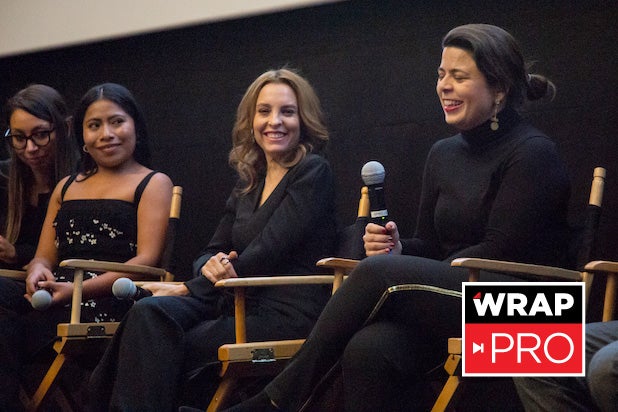 Evolution of Esports: Inside the Growth of the Competitive Gaming Industry (All Things Video Podcast)

‘Roma’ Star Yalitza Aparicio on That ‘Shocking’ Hospital Scene: ‘I Didn’t Know What Was Going to Happen’ (Video)

Yalitza Aparicio, Marina de Tavira, and Gabriela Rodriguez share behind-the-scenes stories from one of this year’s most Oscar-nominated movies

For Yalitza Aparicio, Marina de Tavira, and Gabriela Rodriguez, the making of Alfonso Cuarón’s Oscar-nominated drama “Roma” was a constant exercise in responding to the unexpected.

“Roma” was shot chronologically, and the actors received their scripts on the morning of the shoot, allowing them to respond organically to the moments in their characters’ lives.

When it came to filming one of the most climactic scenes in the movie — where a pregnant Cleo is rushed to the hospital only to give birth to a stillborn — neither the cast nor the crew knew that the baby was going to die, which led to an emotional day on set.

“Everybody was crying. It was a very moving scene for all of us,” recalled Rodriguez, who became the first Latina producer to receive an Oscar nomination for Best Motion Picture, during a Q&A with TheWrap’s managing editor Thom Geier in New York City.

“It was a really strong scene. I remember Alfonso told me it was the scene where Cleo would give birth, and I didn’t know what was going to happen to the baby,” Aparicio said. “When we started shooting, and we had real, practicing doctors break the news to me, it was really shocking and it was almost as though I was transported through those emotions to the feeling of losing a child.”

“Roma” tells the story of Cleo, an indigenous woman who works as a live-in maid for a middle-class family in Mexico City in the 1970s. Based on Cuarón’s own upbringing, “Roma” premiered at the Venice International Film Festival in August and began streaming on Netflix in December. The film has earned 10 Oscar nominations, with Aparicio, de Tavira, and Rodriguez receiving nods for Best Actress, Best Supporting Actress, and Best Motion Picture, respectively.

Also Read: BAFTA Awards 2019: 'The Favourite' Dominates, But 'Roma' Wins the Big One

“I was really not aware that this was the story he was going to tell, because he didn’t give us the script [before filming],” Rodriguez said. “It was an amazing process in terms of how you can defy the standards of how to shoot a film… and you would think that audiences outside of Mexico wouldn’t connect with it, or it wouldn’t be commercial, but I think it defied those preconceptions for the better.”

Aparicio has received acclaim for her role as Cleo, which was her first acting role. Previously, Aparicio worked as a schoolteacher before deciding to audition for the film. She viewed “Roma” as a chance to bring an indigenous woman to life on screen, and saw a connection between her mother, who is a domestic worker, and the character in the film.

“[On the first day], I was so nervous and shaking and concerned that the camera would capture that,” Aparicio said through a translator. “I don’t think I’ve ever gotten comfortable in front of the camera, but once we started shooting, it was a matter of forgetting that other people were in the room and forgetting that there was a camera present. Sometimes I would forget that we were in a film and just feel like I was living out my life.”

For de Tavira, the process of acting without a script proved difficult but ultimately rewarding.

“Not having the script and not knowing anything about our characters up to the moment where the story starts… we knew nothing of what they were going to be going through,” de Tavira said. “It’s a blessing for actors because you can experience acting as being in the present tense, which I think is the way acting should be. I’m the only trained actress in the cast, so at the beginning that was really difficult for me, not for them. I really learned a lot.”

Despite the challenges of acting on camera for the first time, Aparicio said that the hardest part of filming “Roma” was that she had to speak the indigenous language of Mixtec for the role, despite not speaking the language herself. She was tutored in the language by co-star Nancy Garcia, often moments before a scene was shot.

“[At a screening of the film in Oaxaca], a lot of people approached me and said they were really proud to hear Mixtec on the big screen and in a film with such an established director,” Aparicio said.

Rodriguez, who is a long-time collaborator of Cuarón’s and served as a producer on his 2013’s “Gravity,” said that the director’s unique approach to making the film — while often a challenge from her perspective as a producer– is representative of his willingness to take on risks and defy Hollywood norms.

“My entire professional career has been working with him, and I told him, normally you start with independent movies and funding and then you go to big studio movies like ‘Gravity,'” she said with a laugh. “I’ve been working for him for about 15 years and he never ceases to surprise me.”