Yellowstone is a national park. “Yellowstone” may be a national treasure — or at least, the drama series is to the new Paramount Network.

With its Season 1 finale looming on Wednesday, the first series developed by the rebranded cable channel has averaged 5.0 million total viewers each week, per Nielsen’s most current ratings, which counts seven days of delayed viewing where available. That makes it the second most-watched series on all of cable television, behind only AMC’s “Walking Dead.”

It also makes “Yellowstone” the channel’s most-watched series ever — and that includes the network’s Spike TV days. No wonder Paramount already renewed its prized pony.

In terms of ratings, “Yellowstone” has averaged a 1.42 among adults 18-49, which is the demographic most-coveted by advertisers.

Below is a nifty grid showing off the cable series rankings across the 52-week 2017-18 TV season. This one ranks series by Nielsen’s Live + 3 Day metric, which counts 72-hours worth of delayed viewing. 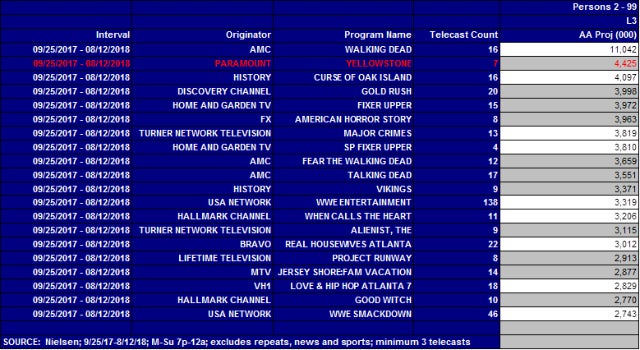 Sidebar: Who knew “Curse of Oak Island” did so well? And how about those Hallmark shows? Yes, this story is about “Yellowstone,” but one more mini-tangent: See that discrepancy between the No. 1 and No. 2 shows above? Anyone who declares “The Walking Dead” to be dead is dead between the ears.

OK, back to the main subject here. One last brag on behalf of the Paramount Network: On digital platforms, “Yellowstone” has generated nearly 10 million streams on Viacom owned-and-operated platforms, as well as 6.8 million video-on-demand transactions.