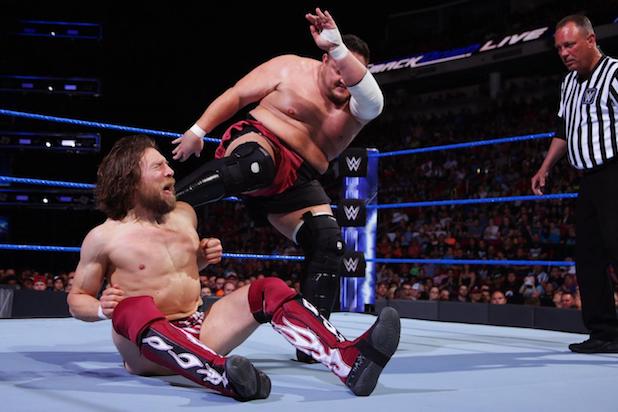 “SmackDown” on Fox will remain live, TheWrap has learned exclusively — so WWE can hang on to all of its “SmackDown Live” marketing and signage. You know, unless they’d like to change the blue show to green or make some font tweaks ahead of next year’s big move from NBCUniversal cable to Fox broadcast.

There was still the lingering question about whether or not Fox’s “SmackDown” would remain live. After all, WWE often books house shows on Friday nights, which are not televised.

While it stood to reason that “SmackDown” should remain live — especially with the huge price tag the rights command and the fact that we live inside of a spoiler-happy, Twitter-obsessed culture that demands instant gratification — the logistics were the real question for the previously pre-taped series. What remains to be seen now is if WWE will try to book house shows on Tuesdays to offset any revenue losses from eliminating a key night for live attendance.

WWE declined comment on this story. Fox Sports did not immediately return our request for a statement.

As previously reported, USA will keep the rights to Monday’s “Raw,” which is also live and airs three hours as opposed to “SmackDown’s” current 120-minute runtime.

“SmackDown Live” on Fox won’t be the brand’s first time on broadcast — the 19-year-old show used to air on UPN, then The CW, then MyNetworkTV, before heading to NBCUniversal’s Syfy and, ultimately, USA.

We expect WWE and Fox Sports to make “SmackDown Live” on Fox official with an announcement as early as next week.