Marvel Comics icon Stan Lee is known for his frequent cameos in Marvel movies. They’re usually pretty hilarious, like in “Black Panther” when Lee tries to steal the casino winnings of T’Challa (Chadwick Boseman), or in “Thor: Ragnarok,” when he uses a scary bladed machine to give Thor (Chris Hemsworth) a haircut.

But Lee’s cameo in “Deadpool 2” is a blink-and-you’ll-miss-it appearance. It’s actually very easy for it to come and go without you even noticing it: rather than a spoken role, it’s just a very large image of his face during one of the film’s big action sequences.

You can catch Lee during the sequence in which Deadpool (Ryan Reynolds) and the rest of his X-Force buds jump out of a helicopter to parachute down onto a prison convey transporting Russell (Julian Dennison). While all the other X-Force members are scattered by the high winds that Deadpool ignored, Domino (Zazie Beetz) still finds herself on course.

As Domino descends toward the convoy, she passes a building with a wall-sized mural of Lee’s face, painted in tropical colors. It whips by very quickly on the right side of the frame as Domino lands on the truck. 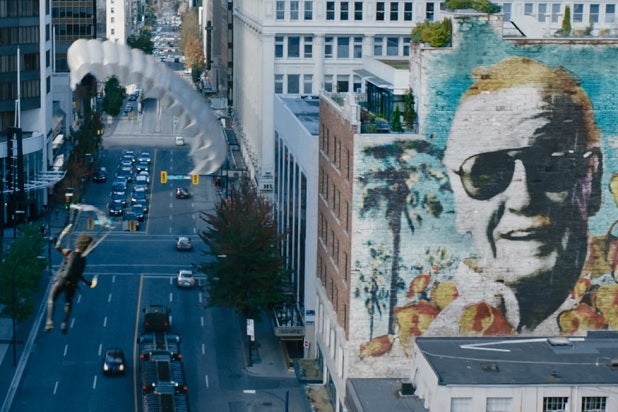 It’s a bit unusual that Lee didn’t show up in a normal cameo in “Deadpool 2,” since he usually appears in person. In the first “Deadpool,” he played a DJ in a strip club that Wade Wilson’s girlfriend Vanessa (Morena Baccarin) works at, and most recently, in “Avengers: Infinity War,” he drove the bus taking Peter Parker (Tom Holland) and Ned (Jacob Batalon) on a field trip just as Thanos’ minions attack New York.

It’s not the first time Lee has skipped a live cameo, though — his image appeared in a bus ad in the Netflix show “Jessica Jones,” for instance. Lee also said in February that he recently had battled pneumonia, so it’s possible he had to skip “Deadpool 2” for health reasons. Here’s hoping he’s feeling better now.