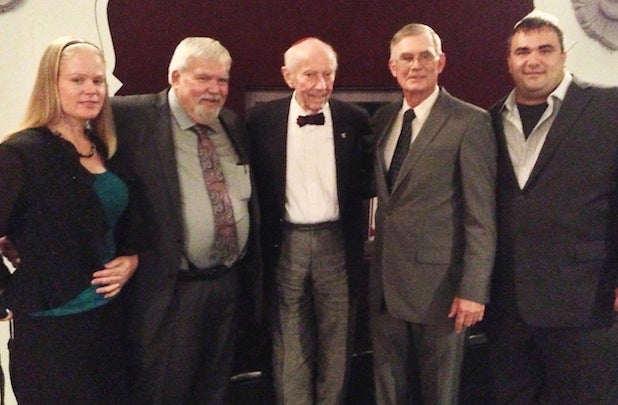 Every year Jews all over the world get their card stamped at annual High Holy Day services. Whether motivated by guilt or compelled by conscience, they are drawn to come together in the hopes that consuming a heady cocktail of atonement and forgiveness will result in a clean slate.

We seem to heave a collective sigh of relief when we leave Temple and rub our hands together in a fevered contemplation of what sin we can commit first. The seven deadly sins seem to be rather pedestrian in a town where sinning is more art form than human frailty.

Sometimes you walk out of Temple, and sometimes you fly. If you’re lucky enough to feel the wings lift you from the ground, then you have become transformed — as I was, as many others were on Yom Kippur after a transcendent service where we were introduced to a hero — and the generations that would not exist save for his bravery.

The congregation of the Beverly Hills Temple of the Arts is heavily skewed towards those who work in the entertainment industry. Saturday morning, wet smacks from pursed lips marked the percussive sounds of the air-kiss that is accompanied by whispered box-office results as yarmulkes are donned and we moved en masse into the bosom of the historic Saban Theater, not knowing that our exit hours later would be a more earnest and heartfelt egress through eyes wet with tears.

We would exit as different people that day, courtesy of a rather frail and meek character actor whose shadow cast a golden image over all of us.

It was the day of Kristallnacht, forever remembered as the Night of Broken Glass when young Curt Lowens was instructed by his teacher to get on his bike and go home and not look anyone in the eyes. This was Germany on Nov. 9, 1938. In a hushed whisper Curt’s teacher warned him that the Hitler Youth were stoning Jewish students.

As Curt cycled back home, the Temple where he was to be bar mitzvah’d was already on fire. The pogroms that marked one of the darkest events in human history had begun.

Kristallnacht heralded a wave of violent anti-Semitism where coordinated attacks against Jews in homes, hospitals and businesses erupted. With each window that Nazi sledgehammers broke, another family was torn apart like the shards of glass that littered the streets of Jewish ghettos.

Curt’s family was no different. As this man spoke to the hushed congregation I started to falter, and fade out. It must be a natural reaction to hearing the details of unspeakable horrors and personal tragedy. The details of how this 12-year-old boy wound up in Holland, ferried there either by family or friends is not clear to me. What was clear were the events that followed, and the story of the brave Dutch people who saved thousands of Jewish families.

The soft sound of muffled sobs were all around me as Curt described how as a member of the Dutch Resistance during the battle of Rotterdam, he had followed the downward parachute path of two U.S. airmen who had bailed out of their aircraft that took heavy fire from the German artillery. The chutes were beacons to the Nazi forces that relentlessly hunted down American pilots.

Curt reached them first — minutes before capture, interrogation and execution by Nazi troops. He hid them in a haystack on a Dutch farm where they waited it out. He saved their lives.

Curt recounted how he felt at seeing an American in uniform. Hope had descended under the cumulus of a billowing parachute, and with a whisper he told Capt. Reginald E. McNeil to keep his head down as the sun set and Nazi searchlights scanned the farm for the pilots. Curt could only remember that “one of the pilot’s name was Mac” … and with that, Rabbi David Baron approached Curt and put an arm around him.

Facing the congregation, Rabbi Baron explained that Mac was no longer with us. And then, in a gesture that I will never forget, he asked Curt if he would like to meet the children of the man whose life he had saved.

Two generations of McNeils appeared on stage and embraced Curt (pictured at top, with Lowens in the center). As they surrounded them, their shoulders heaving with emotion, I looked around and took it all in. Hundreds of people who walked into this service wondering when it would end were now riveted to their seats, clutching handkerchiefs and each other. No eyes were on watches, because time didn’t exist.

Our focus was on bravery, our attention was on gratitude, our consciousness achieved a higher plane. These people would not have existed had it not been for this man’s bravery. The darkness of those desperate times could not stop the blossoming of these lives.

The arrogance of power had no power against this one man and the others in the Dutch Resistance who shepherded Jewish children into their homes and then later spent years reuniting these children with surviving members of their families. 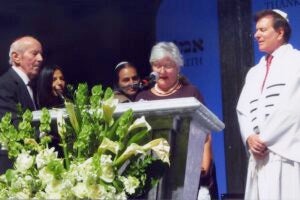 Curt stood there, a giant whose frailty was the ultimate deception. We also learned that Curt didn’t rest on the laurels of just saving U.S. servicemen. A throng of people now appeared on stage. One of them spoke, Lea Radziner, a woman who had been saved by Curt as a child. Rescued from a children’s camp in the fall of 1942, she told the story of Curt and the Dutch people who published the photos of disenfranchised children who were detached from parents and siblings.

(At left: Lowens, Radziner and Rabbi Baron, along with Radziner’s children.)

And on that stage stood an actor. An actor much like those other actors that I had come to know who stood up for the elderly. Why is it that those who appear only two-dimensionally on flat screens in homes and theaters appear to command and channel the superhuman into what is plainly humane? It might be the ability to assume the role of the oppressed, and they use that as fuel to engage the oppressor.

We find actors sidestepping human excrement as they walk villages in Darfur. We watch them dodging the bullets of public disdain as they champion politically unpopular ideals. How many of us have reached into our own pockets to fund research, support a hospital, or have searched for a missing child because of the urgings and admonitions of someone vaguely familiar, yet someone that we have never met?

It’s no wonder that Curt, the man on whose shoulders two generations could credit with their existence, found a living and a means of expression in Hollywood. On that stage, steadied by the arm of a rabbi and warmed by a congregation that had been changed forever by him, Curt Lowens’ star rose stratospherically.

Those who would not exist save for the heroics of Curt came together with him and with us and taught us that fighting oppression in whatever form is more than a duty, it is our calling.

Curt changed the world, and showed us how each of us can do the same.