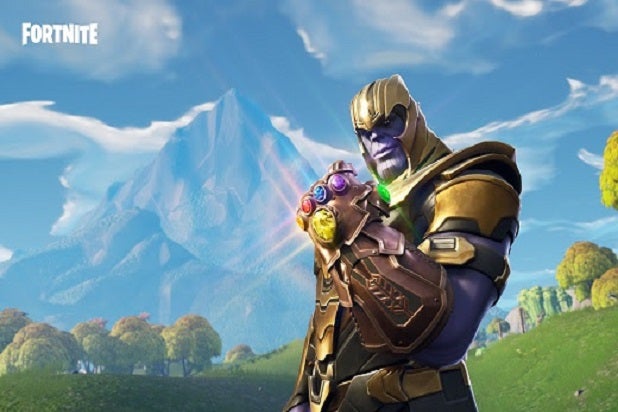 Starting today, “Fortnite” now includes a special object — Thanos’ all-powerful Infinity Gauntlet, the glove he wears that houses the six Infinity Stones. Players who find the gauntlet while playing “Fortnite” transform into Thanos, gaining his ridiculous power. That player also becomes a target for everyone else in the game, changing the free-for-all play style of “Fortnite” into a manhunt for the universe’s scariest bad guy.

You can check out the quick teaser trailer below.

“Fortnite” has recently taken the video game landscape by storm. The hugely popular title, developed by Epic Games, drops 100 players onto a large island with nothing but their wits and an axe they can use to bash other players and cut down trees. After skydiving onto the island, players have to scavenge for weapons to use to fight everybody else. The idea is to be the last person standing, like a video game version of “The Hunger Games” or the Japanese film “Battle Royale.” In fact, the genre of game “Fortnite” fits into, along with other popular titles like “PlayerUnknown’s Battlegrounds,” borrows the name “Battle Royale” from the film.

You might have heard about “Fortnite” when rapper Drake played the game on video game streaming portal Twitch and quickly obliterated viewer records.

The crossover is a huge get for Epic Games, who have climbed to the top of the trendy Battle Royale mountain with “Fortnite,” which is free to download and play on PlayStation 4, PC and Xbox One. As Entertainment Weekly reports, “Infinity War” directors Joe and Anthony Russo are gamers and big fans of “Fortnite,” and apparently the crossover marketing opportunity was their idea.

“Over the past few months, while we were editing Infinity War, we’d take breaks to hop on and get in a few games,” Joe Russo told Entertainment Weekly. “And then we started thinking, how cool would it be to have some kind of Avengers-Fortnite mashup?”

Apparently, the directors contacted Epic Games’ worldwide creative director, Donald Mustard, and the idea took off. And now Thanos can up in “Fortnite” to try to ruin a whole new universe.

Since there’s already a website that helps fans of “Infinity War” figure out if they’d survive Thanos, it seems fitting to have a game that gives them the opportunity to find out if they could fill in for the roles of Captain America, Black Panther, Scarlett Witch or Iron Man in fighting him.

Then again, “Fornite” is a bit of a ridiculous game, with a cartoony style, crazy things like rocket launchers and teleporters, and a ton of dancing. At least taking on the Mad Titan in the game isn’t as much of a downer as it was in the movie, as this video from gaming site Polygon suggests.