When she was growing up black in the South in the 1970s, Margot Lee Shetterly’s parents told her anyone could become a scientist. And everywhere she went, she saw it to be true.

“I grew up around scientists in general,” she said. “A lot of people worked at NASA. They were part of the community. You saw them in church and at the grocery store. For me it was the most natural thing in the world.”

But the Hampton, Va., native, whose father was a NASA scientist and mother was an English professor at  Hampton University, had only fleetingly heard of Katherine Johnson, Dorothy Vaughan and Mary Jackson — three African-Americans who helped put a man in orbit in the early days of the space race. Their little-known story became the basis for Shetterly’s first book, “Hidden Figures,” which comes out Tuesday. A 20th Century Fox film based on the book and starring Taraji P. Henson, Octavia Spencer and Janelle Monáe arrives Jan. 13.

It comes at a time when tech companies claim — 60 years after the events of “Hidden Figures” — that they just can’t find enough scientists who are women, or people of color. It also follows the #OscarsSoWhite questions about why so many films focus only on white people. “Hidden Figures” shows that there were African-American woman scientists decades ago, and that stories like theirs could have been told long before now.

Shetterly, who learned about the three women from her father, began interviews for “Hidden Figures” in December 2010, after spending several years working in finance and publishing. She found a young, persistent literary agent, Mackenzie Brady Watson, who helped her land not only her book deal, but also one for the film. The movie came to life when Watson brought the story to producer Donna Gigliotti, a Best Picture Oscar winner for “Shakespeare in Love.” 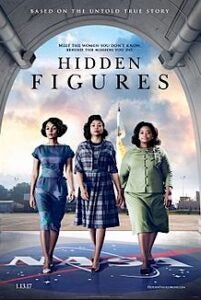 Together, they took on the happy problem of how to produce the book and film simultaneously.

“I optioned a 55-page book proposal — that and whatever research Margot had done was all we had to work with,” Gigliotti said. “I was taking a bit of a flyer, but honestly all you have to do is look at that story.”

“Before she started interviewing, I couldn’t find a single human being who had heard of Jackson, Johnson and Vaughan — people who thought they were conversant with NASA,” she continued. “The idea that it was this authentic, untold story said to me it had tremendous movie potential.”

“It doesn’t feel like homework,” she added. “It’s entertaining.”

Shetterly praised Gigliotti, who also developed “The Reader” and “Silver Linings Playbook,” among other films. “Donna had a vision for it,” Shetterly said. “She loves really looking for a story about strong women, an all-American story. So often, we have the idea that something is a ‘black’ story. I hope this will be seen as an American story, told by protagonists who are American.”

In the film, Johnson (Henson), Vaughan (Spencer) and Jackson (Monáe) push back against the institutional inertia at NASA and its predecessor agency, eventually joining the effort to make astronaut John Glenn the first American to orbit the earth, in February 1962. Kevin Costner, Kirsten Dunst, Jim Parsons, Mahershala Ali, and Aldis Hodge star in supporting roles.

“Paraphrasing Martin Luther King, we’re Americans here, females, Muslims, whatever,” Shetterly said. “This thing we call ‘the dream’ is complicated and wonderful, but the black American dream isn’t separate from the American dream. A lot of this book is about exploring that.”

Gigliotti said the production faced an embarrassment of riches — and tough questions about what to leave out. “Margot covers a very, very broad period of time,” she said. “Initially [“Hidden Figures” screenwriter] Allison Schroeder was so excited that she tried to put everything in there. Her first draft was so long and it covered so much.”

Shetterly said Vaughan worked at the National Advisory Committee for Aeronautics (NACA), which evolved into NASA.

“When I started digging into records, I realized that she was a manager as the head of a group of black female mathematicians in the 1950s. She was the very first African American manager in all of the organization that would become NASA.”

Shetterly made similar discoveries about Mary Jackson — “an engineer, which was very rare for any woman in 1958” — and Katherine Johnson, who turned 98 on Aug. 26. “Finding these things, and learning how they were able to achieve this measure of success back then, was a revelation,” she said.

Gigliotti saw links between the dynamic trio of “Hidden Figures” and today’s trailblazers. “Women mathematicians are really in the zeitgeist right now,” she said. “Look at two summers ago, when Google unveiled what their workforce looked like and bemoaning that they couldn’t find women.”

Shetterly noted that “Hidden Figures” was optioned and in the works before the #OscarsSoWhite discussion.

“This is a longstanding issue. I’m not comfortable with the word ‘diversity,'” she said. “It’s about inclusion, that’s what this is about: ‘I am a part of the American mosaic too.’ And these women were directly connected to that.”