(Warning: This post contains spoilers through the “You” Season 3 finale.)

Sherry (Shalita Grant) and Cary Conrad (Travis Van Winkle) are the king and queen of Madre Linda, the upscale Northern California suburb that Joe Goldberg (Penn Badgley) and his new wife Love Quinn (Victoria Pedretti) move to at the beginning of “You” Season 3 to have their unplanned (at least for Joe) baby boy, Henry. While many things make Joe and Love miserable — mostly each other — throughout the course of Season 3, it’s the Conrads that are the ban of their existence when it comes to trying to fit into their community.

Well, that is until things take a turn about midway through the season, and suddenly Love and Sherry are BFFs and Joe is going on he-man camping trips with Cary and his crew, and then before you know it, the married couples are about to sleep together at a proposition by swinging experts, Sherry and Cary. Love cautiously decides it’s for the best for her and Joe’s getting-stale marriage, and Joe is fully on board (because he’s trying to end said marriage, and run off with his new “you,” Marienne, played by Tati Gabrielle).

But things go south watching Sherry and Joe have sex freaks Love out enough that she runs off upset with Joe and brings up a little too loudly how she killed their next-door neighbor Natalie (Michaela McManus) out of jealousy to protect their marriage. With Love and Joe being Love and Joe, the second they realize Sherry and Cary did in fact hear them, they fight them tooth and nail until they manage to lock those two up in the cage under Love’s new bakery. 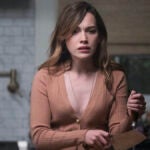 Sherry and Cary manage to do the almost impossible by surviving a stint in the cage — though it took them both shooting each other first and a long hunt for the hidden key — something we rarely see happen on “You,” and have never seen two people deal with together before. And then, being the power couple they are, they manage to monetize the experience as a therapy exercise for partners.

See below for TheWrap’s interview with Grant and Van Winkle about the dynamic duo that is Sherry and Cary.

TheWrap: First off, what was it like filming in the iconic “You” cage, and how long were you actually in there for during shooting, as Sherry and Cary spend quite a while locked up by Love and Joe?

Travis Van Winkle: The great thing about filming in the cage was, a lot of times you don’t film in consecutive order, you always film all out of order based upon location and cast availability. We got to film this as it would happen in real life. And so we actually didn’t spend too much time in the cage. I think seven days, maybe. And we got to shoot in sequential order. And as an actor, that helps so much, because you really get to stack these moments. You don’t have to use your imagination to think about how it would have happened. And so I feel like it allowed us to film this kind of like a play, which was was really helpful. And because we were in there for, I think it was three days in a row and then four days in a row, I definitely wanted to get the hell out of the cage by the end of filming it. But I feel like being in such a confined space, I think it brings out different colors, even just as an actor, but as a couple, of course. The layers are pulled back, the facade is gone. Who are these people? Sherry and Cary are the real deal. That’s what you find out. And they’re not perfect. But they love each other and they make it through some some tough stuff. And I think they win in the end. And I love our storyline.

Shalita Grant: No working toilets. You’re not eating your regular diet. It was terrible. Like, if a relationship is meant to fall apart, it’s going to happen in that cage. And I think that it’s a true testament to the real love and “the why” that Sherry and Cary are together, which I realize, as I’m saying that, is a very Sherry and Cary thing, “the why.” (laughs) 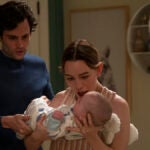 What did you think of Sherry and Cary’s idea to take that trauma and turn it into a TED Talk-worthy couples therapy technique, The Cage.

TVW: Opportunities come around in life and it’s our job to capitalize on it. And I think Sherry and Cary, they don’t hesitate. They see a moment, they take it. And I think there’s something to learn from that.

SG: I think that Madre Linda is a character in Season 3. And the community of Madre Linda has metabolized the worst possible scandal that could happen to a community. And everyone is thriving, for the most part. I mean, Kiki and her baby Toxi, and their new app. I mean, I think that Sherry and Cary are a really good example of the community that they come from. All of these people, their one their one goal in life is to succeed. And so having some serial killers is actually great, because we have a whole genre of television dedicated to murder. So why not capitalize on that?

Back to what got Sherry and Cary in the cage in the first place, what was it like filming the swinging episode with Penn and Victoria?

TVW: I love that Sherry and Cary, they have all these secrets. They don’t give it all up front and you get to realize who they are, that they’re open. I loved filming Episode 8, because you got to see the intimate, vulnerable side of Sherry and Cary. And I think they’re both teachers. They both want to help people. And I think we were there just to help liberate Love and Joe. And it definitely turns out, where we end up in a cage, doesn’t go our way. But it was one hell of an episode. 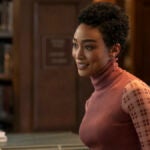 Also Read:
‘You’ Actress Tati Gabrielle on Where Marienne Went and What Happens If She’s Found

SG: Sera and the team, they’re so responsible. And shooting an episode like Episode 8, things could go wrong, like inappropriate things could happen. And I have to say, like for the production team, Greg Berlanti, Sera Gamble, we had intimacy coordinators there, there was so much care to this thing, so that we, and me as an actress, I felt totally safe to be as wild as I needed to be. To really give them the show that they wanted. And on the swinging, we all think it’s just about sex. But there’s also a power element. And in the beginning of Episode 8, with that NDA, you get another layer of Sherry and Cary and why they are the king and queen of Madre Linda. They are the facilitators of the fun, the letting your hair down. So if I email my principal and say, “I need something done, I know what you look like with your pants off, so I know I’m going to get that done.” And that’s the brilliance of that kind of couple. Like, they have their hands literally everywhere.