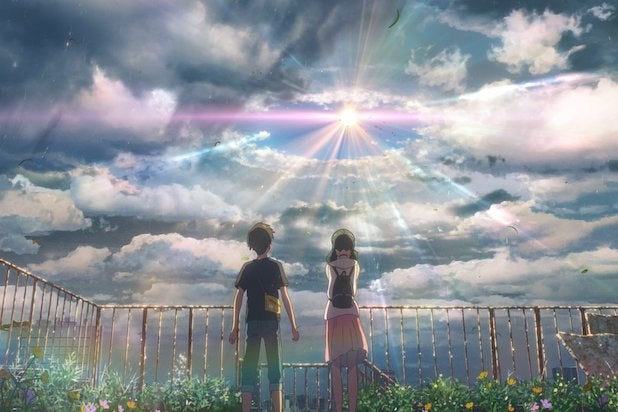 The next film from “Your Name” director Makoto Shinkai is coming stateside.

GKIDS has acquired the North American rights to “Weathering With You,” the latest animated feature from Japanese anime director Shinkai, whose 2016 film “Your Name” surpassed “Spirited Away” as Japan’s highest-grossing animated film of all time, earning $360 million at the worldwide box office.

The company will release the film for an awards-qualifying run in 2019 followed by a theatrical release in early 2020 in both the original Japanese language and in an English-language version. The film opens in Japan on July 19.

“Weathering With You” follows a high-school freshman who runs away from his remote island home to live in an unusually gloomy and rainy Tokyo, only to meet a girl who has the power to stop the rain and clear the sky.

“GKIDS is thrilled to be working with Makoto Shinkai and Genki Kawamura on ‘Weathering With You,’ following their blockbuster hit ‘Your Name,'” GKIDS founder and CEO Eric Beckman said in a statement. “We have been huge fans of Makoto Shinkai since his breathtaking ‘5 Centimeters Per Second,’ and he is unquestionably one of the top animation filmmakers working today. ‘Weathering With You’ combines Shinkai’s unparalleled visually beautiful and detailed animation with a riveting emotional story that will be sure to connect with audiences worldwide.”

Shinkai wrote and directed the animated feature, and Genki Kawamura is the producer.

The all-rights deal was finalized out of this year’s Cannes Film Festival and was negotiated by GKIDS’ Beckman and Akihiro Takeda for Toho. Toho is handling worldwide sales rights.

It was announced in 2017 that J.J. Abrams’ Bad Robot and Paramount Pictures acquired the rights to make a live-action remake of Shinkai’s “Your Name,” with screenwriter Eric Heisserer penning the script.

Read the official synopsis for “Weathering With You” below, and watch the international teaser here:

GKIDS proudly presents the highly-anticipated new film from director Makoto Shinkai and producer Genki Kawamura, the creative team behind the critically-acclaimed, global smash hit Your Name. The summer of his high school freshman year, Hodaka runs away from his remote island home to Tokyo, and quickly finds himself pushed to his financial and personal limits. The weather is unusually gloomy and rainy every day, as if to suggest his future. He lives his days in isolation, but finally finds work as a writer for a mysterious occult magazine. Then one day, Hodaka meets Hina on a busy street corner. This bright and strong-willed girl possesses a strange and wonderful ability: the power to stop the rain and clear the sky…