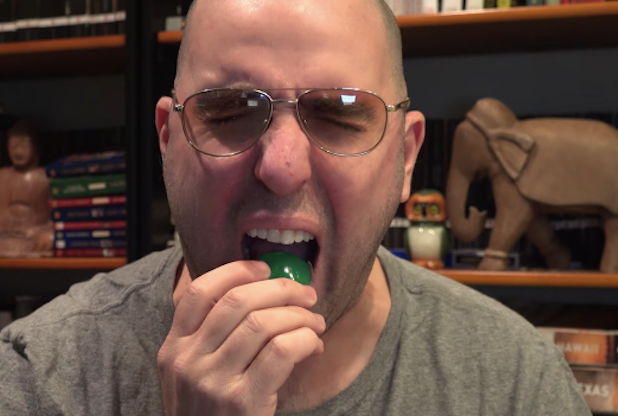 Want to take a big bite of laundry detergent? Knock yourself out.

But YouTube won’t be letting you post a clip of your “meal” anymore. The video giant is pulling clips of the Tide Pod Challenge, a meme that morphed into a viral video craze that has people uploading videos of themselves eating detergent.

Many uploads show people coughing and foaming at the mouth after swallowing pods. Videos flagged on YouTube are being yanked down, and channels that post “pod challenge” clips are receiving a strike. Too many strikes, and an account is suspended.

You can still find pod-eating posts on YouTube, if you’re looking to see what the inane craze is about — although many of the videos now simply include “pod challenge” in its name, followed by a YouTuber mocking the idea of actually trying to digest soap.

The meme first started in 2013, according to KnowYourMeme.com, and has increasingly caught fire of late on social media. Tide’s latest tweet, sent about a week ago, said its pods are for “DOING LAUNDRY. Nothing else.”

What should Tide PODs be used for? DOING LAUNDRY. Nothing else.

Eating a Tide POD is a BAD IDEA, and we asked our friend @robgronkowski to help explain. pic.twitter.com/0JnFdhnsWZ

Not eating something that can burn a hole through your stomach would seem like a no-brainer. But according to the American Association of Poison Control Centers, 39 people have already been treated for “intentional exposure” this year.