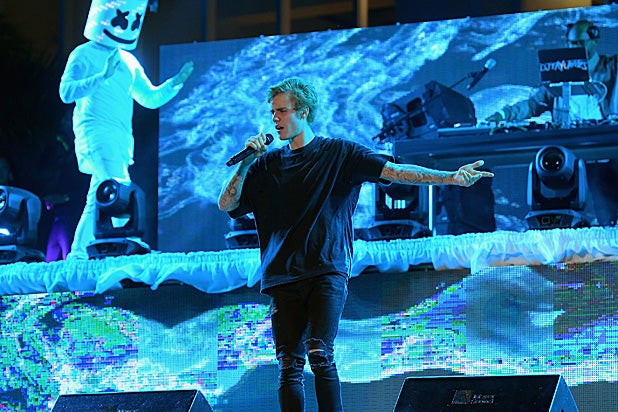 YouTube is working with Justin Bieber on a “top secret” untitled project that is expected to launch in 2020, the Google-owned video service announced Thursday evening at its annual Brandcast event.

The new original project is part of a larger strategy shift for YouTube, which said it is now focused on producing three types of series: music, learning, and personalities. No further details were given on the untitled Bieber project, which checks off two of those boxes, but — like all YouTube Originals going forward — the series (or film) will have a free, ad-supported window. This means users will have a period of time to watch the content for free before it is placed behind the YouTube Premium paywall.

YouTube said its upcoming slate of originals, which spans 12 new projects, will include scripted, unscripted, interactive and live entertainment events.

“For today’s viewers, primetime is personal and our content resonates so strongly due to the diversity and richness of our unmatched library and platform capabilities,” said chief business officer Robert Kyncl. “While every other media company is building a paywall, we are headed in the opposite direction and now have more opportunities than ever to partner with advertisers and share our critically-acclaimed originals with our global audience.

For its personality-driven content, YouTube is developing documentaries with internet celebrities like Dude Perfect, who has over 41 million subscribers on the platform, and other popular names like Paris Hilton and Kevin Hart. The company is also working on its interactive series which will star gamer/YouTuber Mark Fischbach.

YouTube also announced five new learning series which it is developing with a mix of popular creators from its platform. Following the “BookTube” special with Michelle Obama that drew 1.5 million views, “BookTube” will return as a series that features authors discussing their best-selling books with top YouTubers. The video service will also explore the magic of Hollywood with creator Jake Roper in “Could You Survive the Movies.” Expected to launch in October, the series will attempt to answer movie-driven questions such as “What would happen to your body if you actually jumped in a DeLorean and went back in time a la ‘Back to the Future?'”

Launched in October 2015, YouTube’s video service (then known as YouTube Red) housed the company’s first slate of original projects. Since launch, its content has been primarily influencer driven and has featured the likes of YouTuber Jake Paul, creator duo Rhett & Link, and internet celebrity Liza Koshy. The video platform had its first taste of real success with “Cobra Kai,” a comedy series based on the 1984 “Karate Kid” film. In 2018, the series was nominated for an Emmy in Outstanding Stunt Coordination for a Comedy Series. “Cobra Kai” was just renewed for a third season.