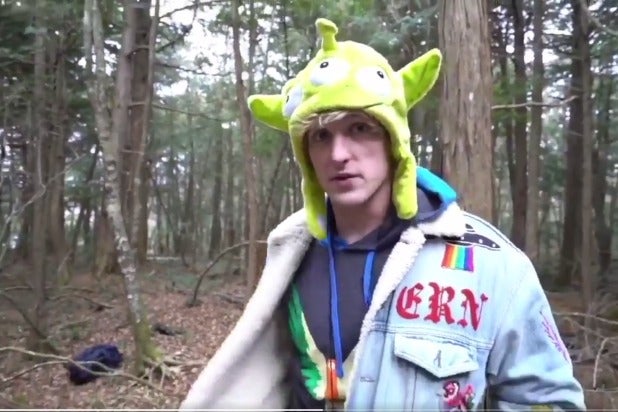 Popular YouTube star Logan Paul issued a lengthy apology late on Monday after removing a 15-minute video first posted on Sunday that depicted the dead body of a man who apparently hanged himself from a tree in Japan’s Aokigahara forest.

The two-time 2017 Teen Choice Award winner insisted that he didn’t include the footage in his Sunday video — which was taken down on Monday — to be provocative or to grow his audience.

“I didn’t do it for the views. I get views,” he wrote. “I did it because I thought I could make a positive ripple on the internet, not cause a monsoon of negativity. That’s never the intention. I intended to raise awareness for suicide and suicide prevention.”

But Paul, the older brother of fellow YouTuber and former Disney Channel “Bizaardvark” star Jake Paul, drew heavy criticism for showing the graphic images of the apparent suicide — especially since it came in the midst of a 15-minute clip about his Japanese travels in which he laughs and jokes about other aspects of local culture.

The video was uploaded Sunday under the title “We found a dead body in the Japanese Suicide Forest…” and garnered more than 6 million views in less than a day, according to New York magazine. On Monday, it was “removed by the user.”

In his apology, Paul noted that he has posted an edited 15-minute video “EVERY SINGLE DAY for the past 460+ days” and noted, “it’s easy to get caught up in the moment without fully weighing the possible ramifications.”

When Paul and his buddies stumble on the body in Aokigahara, an area near Mt. Fuji that has become notorious as a suicide locale, his reaction is initially one of disbelief. “Yo, are you alive?” he says aloud. “Are you f—ing with us?”

At another point in the video, Paul addressed his fans with a more serious message: “Suicide is not a joke. Depression and mental illness are not a joke. We came here with an intent to focus on the ‘haunted’ aspect of the forest. This obviously just became very real, and obviously a lotta people are going through a lotta s— in their lives.”

According to New York magazine, he also included a link to the American Society for Suicide Prevention in the YouTube description for the clip.

Also Read: Jake Paul on Playing an 'Amped Up' Version of Himself on 'Bizaardvark' (Video)

But those efforts proved insufficient for many on the internet — especially since the clip also included more jokey scenes of his travels in Japan.

“I really don’t know what’s more disgusting, the fact that Logan Paul filmed the body of someone who committed suicide or that he was able to LAUGH after it,” one commenter wrote.

“How insensitive and sick can you be to film someone in that state,” another wrote.