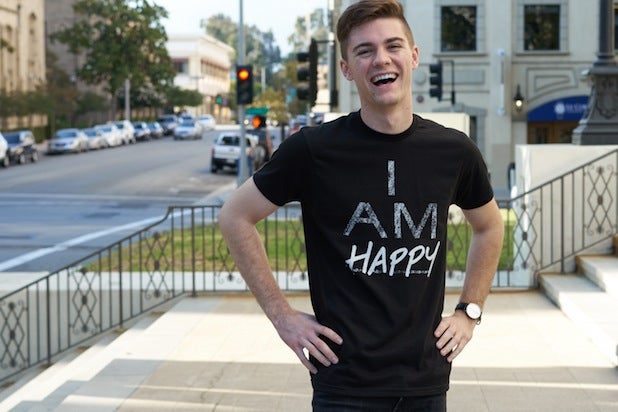 YouTube star Jordan Doww announced Friday that he is launching a new T-shirt line to support victims of the Pulse Nightclub shooting in Orlando. The charity project, called the “I AM” Campaign, will feature a series of shirts reading “I Am Comfortable,” “I Am Me,” “I Am Happy,” and “I Am Free.”

Doww has gained a large teen following online, producing comedy skits and collaborations with other Internet stars on his YouTube channel. Last October, he came out as gay with a special video and a guest column on MTV News, and he has recently been nominated for the Choice Comedian Teen Choice Award against heavyweights Ellen DeGeneres, Jimmy Fallon, James Corden, Aziz Ansari and Kevin Hart.

“Upon starting this amazing production, I found the courage to tell the last people in my life that I cared about the most who I really was: my parents,” said Doww about coming out online. “It was like everything was finally coming together before my eyes.”

Doww had planned to launch the “I AM” Campaign on June 12 with 100% proceeds to be donated to the Trevor Project and DoSomething.org. After the massacre in Orlando, the launch was delayed to allow “I AM” to extend support to the victims. In addition to the other charities, the project will also donate to a GoFundMe campaign that has been set up to support the victims of the shooting and their families.

“I’m launching this line to support those who have suffered a loss, and for my viewers who are constantly showing their support for the LGBTQ community,” Doww told TheWrap. “The fight doesn’t end here, we will continue to stand strong and move with the progress the U.S. has seen in the past few years. We stand as one, together and always.”