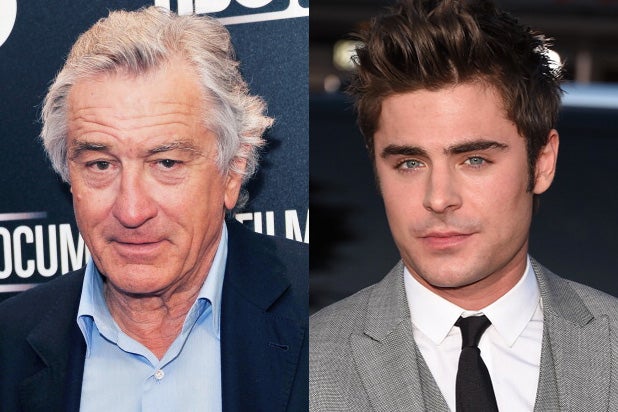 Barry Josephson is producing the project, which was previously set up at Universal and is now being shopped to other studios.

John Phillips wrote the script, which follows a lascivious, recently widowed Army veteran (De Niro) who tricks his uptight grandson (Efron) into escorting him to Florida for spring break.

Jeff Bridges and Michael Douglas were previously rumored to be up for the fun title role that will now be played by two-time Oscar winner De Niro.

Mazer co-wrote “Borat” and “Bruno” with Sacha Baron Cohen, and he also served as an executive producer on “The Dictator.” He most recently wrote and directed the romantic comedy “I Give It a Year,” which starred Efron’s “Neighbors” co-star Rose Byrne.

QED’s upcoming releases include Brad Pitt’s WWII movie “Fury,” Barry Levinson’s “Rock the Kasbah” with Bill Murray and a pair of Richard Gere movies — Andrew Renzi’s “Franny” and Oren Moverman’s “Time Out of Mind,” which will screen this week at the Toronto International Film Festival.

Phillips, who also wrote the DreamWorks comedy “Who Invited Her?” and a draft of “Bad Santa 2,” is represented by UTA and Underground.