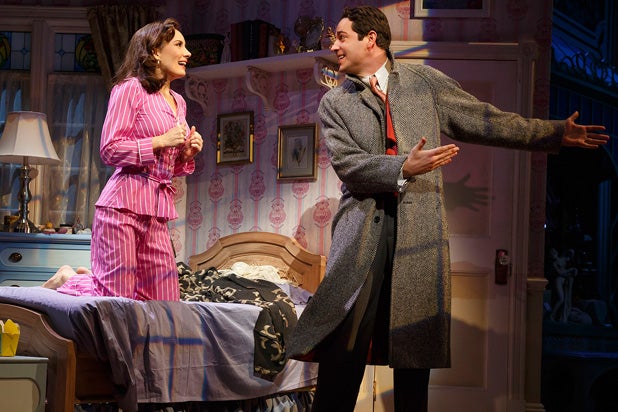 The Tony-winning musical revival “She Loves Me” will become the first Broadway production to be broadcast live in a deal with online streaming service BroadwayHD, it was announced Wednesday.

The show, which stars Laura Benanti, Zachary Levi and Jane Krakowski, will be available for home viewing on Thursday, June 30, at 8 p.m. ET, recorded live from Roundabout Theatre Company’s Studio 54.

It will be produced in association with Ellen M. Krass.

Most recently BroadwayHD.com live streamed the Behind the Scenes Show for the 70th Annual Tony Awards. Past live streams also included Off Broadway productions such as the New Group’s “Buried Child,” and Signature Theatre’s “Old Hats.”

“We are honored to expand the reach of live theater beyond Broadway to audiences everywhere,” said Stewart F. Lane and Bonnie Comley, co-founders of BroadwayHD. “This has always been a dream of ours and we are happy to achieve it in less than a year since our launch.”

“As a nonprofit institution, this is an incredible opportunity for us to share Scott Ellis’ new Broadway production beyond our subscribers, donors and other ticket buyers for our limited run at Studio 54,” said Todd Haimes, Roundabout Theatre Company’s Artistic Director.

The 1963 musical, with a book by Joe Masteroff, lyrics by Sheldon Harnick and music by Jerry Bock, follows two parfumerie clerks (Levi and Benanti) who bump heads on the job but are secretly swapping anonymous love letters.

Ellis’ acclaimed revival won the 2016 Drama Desk Award for Outstanding Revival of a Musical as well as a Tony for David Rockwell’s jewel-box scenic design.