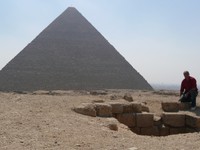 A major break-through has occurred for Egypt in its quest to reclaim five major pieces from five major Western museums. The Hildesheim Museum in Germany has agreed to lend Egypt the statue of the architect of the Great Pyramid in time for the opening of Cairo’s new Grand Museum in 2012, Egypt has confirmed today. (The statue of Hamiunu was taken from here, the architect’s burial mound. An archeologist shows the pit where the statue was found and taken to Germany in 1912, which sits a couple of hundred feet from the pyramid of Cheops, built 4,500 years ago.) I have just spoken to Zahi Hawass, who heads Egypt’s Supreme Council of Antiquities, and while he confirmed the news, it did not seem to mollify him at all. He has made little progress in gaining the agreement for four other pieces he has requested for the Grand Museum’s opening. The Louvre has rejected a request for the Zodiac ceiling of Denderah; Berlin has a committee looking at the request for the great Bust of Nefertiti, but seems negatively inclined; the British Museum is still thinking about the Rosetta Stone; and Boston Fine Arts Museum has rejected the request for the statue of the architect of the next-largest pyramid, Khefren’s. Hawass is especially incensed at Boston, and warned that he is ready to take punitive measures against the museum. "I am going to make especially this museum’s life miserable," he warned. "They get every exhibit for free. They should be punished." In the past Hawass has threatened to ban museums from excavating in Egypt if they do not cooperate on this issue. Regarding Boston, he said that he would confer with his colleagues and announce something in about a month.  (photo copyright: Sharon Waxman)