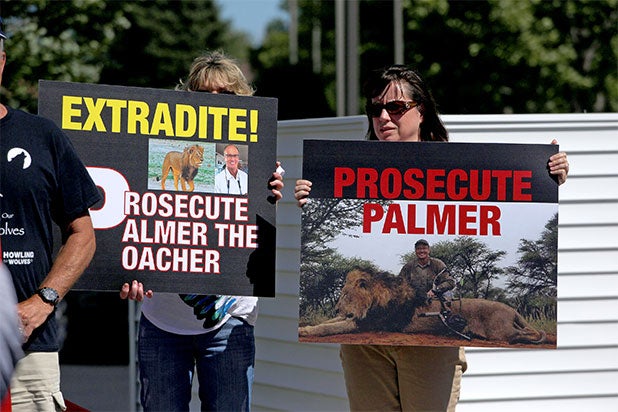 Zimbabwe is seeking the extradition of the American dentist who illegally killed Cecil the lion after luring the animal out of a national park to shoot it.

The Associated Press reports that environment minister Oppah Muchinguri is the first official comment on the lion’s death after accusing American hunter Walter James Palmer of trying to hurt Zimbabwe’s image, and saying Palmer must be made accountable in the country in which he violated the law.

Also Read: 'The View's' Whoopi Goldberg Takes Aim at Cecil the Lion Uproar: 'That Was Not a Hunt, That Was a Murder'

“Unfortunately it was too late to apprehend the foreign poacher as he had already absconded to his country of origin,” Muchinguri said on Friday. “We are appealing to the responsible authorities for his extradition to Zimbabwe so that he be made accountable.”

“There has been an outcry,” Muchinguri continued. “Almost 500,000 people are calling for his extradition and we need this support. We want him tried in Zimbabwe because he violated our laws.”

This comes just a day after the AP reported “most in Zimbabwe expressed a degree of bafflement over the concern” from American citizens.

“It’s so cruel, but I don’t understand the whole fuss, there are so many pressing issues in Zimbabwe — we have water shortages, no electricity and no jobs — yet people are making noise about a lion?” Eunice Vhunise, a Harare resident, said. “I saw Cecil once when I visited the game park. I will probably miss him. But honestly the attention is just too much.”

Also Read: Jimmy Kimmel's Cecil the Lion Plea Rakes in Over $150,000 in Donations

Palmer allegedly lured Cecil onto private land with a carcass laid out on a car and then shot the lion with an arrow on July 1, then tracked the animal for 40 hours before delivering the final blow with a gun.

“I have already consulted with the authorities within the police force who are responsible for arresting this criminal. We have certain processes we have to follow,”Muchinguri continued while at the offices of the national parks and wildlife authorities. “Police should take the first step to approach the prosecutor general who will approach the Americans. The processes have already started.”

Also Read: PETA Says Cecil the Lion's Killer Should Be 'Hanged': 'Hunting Is a Coward's Pastime'

According to Muchinguri, Palmer and professional hunter Theo Bronkhorst violated the Parks and Wildlife Act, which controls the use of bow and arrow hunting. Moreover, Palmer allegedly paid $50,000 to hunt the lion, which, according to Muchinguri, finances an illegal hunt and therefore violates the act as well. The landowner violated the act because he “allowed a hunt to be conducted without a quota and necessary permit,” she continued.

There is an extradition treaty between Zimbabwe and the United States. The U.S. Embassy in the African country said on Friday it does not comment on extradition matters, while the Zimbabwe Embassy in Washington said it has yet to receive instructions.

“We are trying other avenues,” Richard Chibuwe, deputy chief of mission at the embassy in Washington said. “Seeing extradition would be the last resort.”

Palmer is Bloomington, Minnesota resident. According to the Director of National Parks and Wildlife Edson Chidziya, the lion’s head has been confiscated after being severed by hunters.

If charged, this won’t be Palmer’s first hunting-related offense. According to U.S. court records, the 55-year-old dentist pleaded guilty in 2008 to making false statements to the U.S. Fish and Wildlife Service about a black bear he fatally shot in western Wisconsin.