With just one episode left in season two of “Zoey’s Extraordinary Playlist,” it appears Max is in more than just a New York state of mind — he’s booking plane tickets. That said, he hasn’t gone just yet. Could there still be hope?

This week’s episode, titled “Zoey’s Extraordinary Session,” not only saw Max (Skylar Astin) make a final decision on leaving, but also took us back to Zoey (Jane Levy) and Max’s first meeting. And, as it turns out, the latest head-butting between the pair isn’t necessarily new. The two made less-than stellar first impressions on each other. But for Astin, that was a dynamic that was real fun to play with.

“I loved it. I mean, you’ve heard of a meet cute — this was a meet bad, and I really like that that’s the direction they took,” Astin tells TheWrap. “I wasn’t expecting it. You would think they met, they got along, they were instant friends. Turns out, there was a ton of friction.” 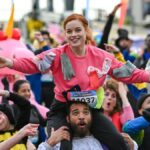 Indeed, Zoey and Max were at one time wildly different. Zoey was exceedingly uptight and Max, being fresh out of college, was pretty carefree. Zoey really had no interest in befriending him, but ended up getting paired with Max for a series of tests as part of the final job interview at SPRQPoint.

When Zoey eventually has to leave the office to go be with her mom at the hospital, Max saves the day and finds a way for her to continue competing with him remotely. The pair comes up with an ingenious invention for Danny Michael Davis, win the competition, and Max heads to the hospital to give Zoey the good news in person.

That small act of kindness certainly lands Max in the good graces of Zoey’s dad Mitch (Peter Gallagher), who at this point, is still in good health. “I like him,” Mitch notes, giving the official dad seal of approval.

“Hey, for what it’s worth, whether she needed to remember that or whether our audiences needed to know that, I’m glad it happened,” Astin says.

Granted, this is long before Simon (John Clarence Stewart) entered the picture, creating the impeccable “Zoey’s Extraordinary Playlist” love triangle we know today. Still, at one point, Mitch was definitely onboard with Team Max. 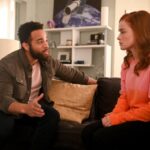 These days, we have a bit of a new triangle. Though Zoey seems happy with Simon at the moment, and Max with Rose (Katie Findlay), some fans still hope that Max and Zoey will reunite. And, just like both Astin and Stewart have always been Team Zoey when it comes to their love triangle, Astin is firmly Team Max when it comes to his relationships with Zoey and Rose.

“Rose clearly is someone that Max, I believe, trusts in a certain way, and I think she really sees the best for him,” Astin notes. “I always like it when a partner can be supportive and want what’s best for you, even if it’s not convenient for them, and I feel like Rose is that. And I think Zoey is coming around to that as well. So it’ll be actually interesting to see how it plays out.”

That said, Astin adds that if Max and Zoey are ever going to give things another go, he believes that it’ll be much more final.

“The problem with their connection is that it’s so meaningful and deep that it’s — if they were to ever get back together, it would really have to be for real,” Astin says. “I could never see them getting back together and then going on another pause. It would just be the beginning of the end. It was smart of them to get ahead of it the first time around, but I want for them to really get real and realize that if they ever really take a stab at this, the implications would be pretty high.” 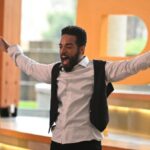 Among those implicated, obviously, would be Simon. Since the beginning, both he and Max have vied for Zoey’s heart, but both have made it clear that Zoey is not a prize to be won. And in that same vein, Astin is confident that even if Max and Zoey eventually find their way back to each other, Max and Simon will maintain a friendship.

At the end of the day, any future between Max and Zoey is something that Astin believes needs to be treated with care.

“The road back together is not something that should be taken lightly, I think,” Astin says. “For either of them.”